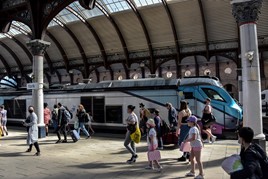 Rail Minister Chris Heaton-Harris has confirmed that the annual rail fares rise will go ahead this January, despite strong calls for fares to be frozen.

Heaton-Harris said that the increase to regulated fares, which is automatically pegged to July’s Retail Price Index (RPI) of 1.6%, was justified due to the enormous cost currently being borne by the public purse to support the railways through the COVID-19 pandemic.

According to official figures, total payments made by the Government to train operating companies (TOCs) since they transitioned to Emergency Measures Agreements in late March had reached £2.28 billion at the end of June.

Meanwhile, revenue collected from fares had fallen to less than 5% of pre-pandemic levels, meaning that rail journeys accounted for just 2% of all trips in the UK but were swallowing up more than half of total public spend on transport (56%).

“Taxpayers have been very generous in their support to keep trains running throughout the Coronavirus pandemic,” said Heaton-Harris.

Transport Focus Chief Executive Anthony Smith said: “The Government needs to get TOCs to offer a combination of cut-price deals, carnet-style ‘bundles’, flexible season tickets for commuters and better value for money fares across the board.”

Smith’s comments followed a survey from the watchdog showing that two out of three rail commuters expect to be working from home more often in the future.

Heaton-Harris responded by saying that the Government is working with the rail industry to seek ways to address these significant changes to established travel and working behaviours, including the introduction of new season tickets that better reflect post-pandemic patterns of working.

RAIL revealed in late July that train operators had been submitting proposals to the Rail Delivery Group that included plans for a season ticket valid for three days out of every seven, or for 12 days out of 28 (RAIL 910).

Meanwhile, reports surfaced in the Daily Telegraph on August 29 that Government is expected to make an announcement on three-day season tickets as part of its drive to get British workers back into the office.