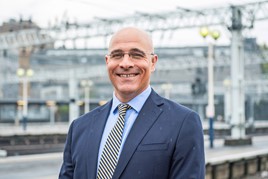 With no well-defined geographic boundaries or physical assets of its own, FNPO is referred to as NR’s only ‘virtual’ route. Yet the challenges it faces are very real.

That is because NR’s devolution strategy is seemingly at odds with FNPO’s nationwide scope and its cross-boundary functions, which have traditionally lent themselves better to more centralised control.

The drive for more local accountability may seem an achievable ambition for NR’s eight geographic-based Route teams, but it was never likely to be an easy bedfellow for FNPO - its customers operate some of the longest diagrams in the country.

This raised some serious questions within Network Rail over devolution’s potential to undermine FNPOs, as other Routes enthusiastically entered into alliances and created Supervisory Boards with their more immediate train operating customers.

With the prospect of conflicting loyalties lurking in the background, NR announced in August 2016 that it would replace its National Freight Team with a newly empowered FNPO Route, with former freight director Paul McMahon at the helm.

He explains: “You can go back to 2011 and the McNulty review for when NR started off devolution, but more latterly we went through a further round of strengthening the Routes.

“Over the years, and in parallel to that, there’s been some legitimate concern from the freight community and national passenger operators that they would be disadvantaged by that devolution process, and that geographic routes would focus primarily on their TOC customers.

“This came out quite strongly in Nicola Shaw’s report , and one of her recommendations was about strengthening the protections and support for FNPOs. We announced our intention to create a ninth route in 2016 before going live in April 2017, to demonstrate to national operators - whether they be freight or passenger - that we absolutely want to look after their interests where they don’t have an obvious home route. This was a tangible and positive demonstration of how we could do that.”

Like all NR Route businesses, FNPO has a scorecard to measure its performance, as well as a route plan for the remainder of Control Period 5 (CP5, April 2014-March 2019) and for CP6 (April 2019-March 2024). It will also receive a Route-based financial settlement for CP6, and its own revenue requirement to be determined by the Office of Rail and Road in October 2018.

Unlike the other Routes, it operates as a matrix structure, with members of McMahon’s planning and operational teams embedded within other Route teams in offices around the country. McMahon says that by having route freight managers in local offices, the right balance has been struck between protecting the interests of FNPO customers - including CrossCountry, freight and charter operators and Caledonian Sleeper - while respecting the autonomy of other Route businesses.

Should any friction still occur at Route level over issues such as timetabling or possession planning, where FNPOs might feel discriminated against, McMahon also has NR’s organisational structure on his side.

“There are some people out there who think I should have a big red button to press to overrule the other Routes, but we have to work with them and the System Operator to achieve what we want to see get done for our customers.

“We’ve worked in exactly the same way since the National Freight Team was put in place in 2011, because collaboration is by and large the only way we can get things done, and by cajoling, co-ordinating and communicating.

“I think there are still concerns out there that NFPO doesn’t have enough authority to control the Routes, but it’s an arrangement that works in the main really successfully.”

He adds: “That’s not to say that from time to time there aren’t any conflicts, because decisions have to be made about what gets prioritised. If needs be, that gets escalated up to me and the other Route MDs to decide.

“Our scorecard is aligned with the scorecards of the geographical routes, and every four-week period I have a review with NR’s executive committee where I present on our performance. If there’s something causing me pain, then I get to highlight it there if it’s not getting resolved at lower levels of the business.

“Personally, I’m quite comfortable that we fit quite nicely into the structure. And we have lots of opportunities to raise concerns if things aren’t working.”

NR’s continued rollout of Supervisory Boards across the network also remains an issue for McMahon to resolve, with many of his customers harbouring concerns that their needs are being overlooked at meetings.

Under current protocols, FNPO MDs can attend meetings of any Supervisory Board where discussions are deemed relevant, but it is widely acknowledged that physical attendance at every meeting across all nine Routes would be impossible.

McMahon says the answer could come by creating a dedicated Supervisory Board for NFPO, which he confirms is on track for the end of March 2018, and by further enhancing representation for NFPOs at all other Route Supervisory Board meetings. He has therefore committed to improving processes and agenda planning on Supervisory Boards - for instance, widening the circulation of minutes from meetings in order to increase the visibility of regional decision-making to the NFPO community.

“NR is rolling out Supervisory Boards on other Routes, and we’re going to join the sequence. Over the next few months we intend to firm that up and make plans to get our customers around the table with an independent chairman to oversee NR’s delivery. We’re on target for the end of March and I’ve had some initial discussions, but I need to knock it into shape over the next two or three months and then launch it.

“Clearly it will need to be more strategic and have a Route-wide focus, and there may well be the need to drill down into local issues on the network within other Routes.

“I’ve also met with Dick Fearn about how freight can get more involved in his board, and I think there’s a wider opportunity to take stock of the whole concept.”

Looking ahead to CP6, McMahon is waiting to discover the detailed budget that will be allocated to his Route following the Statement of Funds Available announcement made by Secretary of State for Transport Chris Grayling in October.

He is confident, however, that there will be a continuation of the Strategic Rail Freight Network funding that set aside approximately £250 million to fund freight enhancement schemes during CP5.

This includes the £60m scheme that was announced in October to install a second track on the Felixstowe branch, which will create 14 further freight paths to and from Britain’s busiest container port. Hutchison Ports UK will also make a financial contribution to the project, demonstrating the strong potential for third party investment in freight schemes across the country.

McMahon says that there are approximately 12 schemes under way nationally that are being wholly funded by rail freight users. These include a former Post Office terminal site in Chelmsford that is being converted into an aggregates distribution hub, and Bevois Park on the Wessex Main Line, which is being used by a concrete manufacturer having been disused for three decades.

And he confidently predicts many more such schemes to emerge in CP6: “In the High Level Output Specification announcement in October they referred to funding being available for freight. We haven’t seen the detail yet, but we are anticipating that there will be a freight fund for CP6, which is a strong vote of confidence from government in the future of rail freight and recognition that the funding we’ve had in this Control Period and the last has been useful for this sector.

“If it comes to pass then we have good plans for CP6. And we already know there is a strong benefit:cost ratio for capital enhancement in freight that is typically 4:1. Compared with the ratios of some other schemes, I think it’s a pretty straightforward analysis.”

He adds: “We already have a good relationship with ports and freight end users, and we have had financial contributions before in the enhancement of the Felixstowe branch. Part of setting up FNPO was having a specialist business development team, and we’re having other conversations about investments that might be made soon.

“We’ve always been very active with the freight community, and we’re very focused on identifying opportunities for investment. And there are some great examples developing - both Chelmsford and Bevois Park on the Solent are on the long list of places where we are working to support new rail freight traffic.”

McMahon began his career as an economist with a range of organisations - including Southern Water, Atkins and the Environment Agency - before joining the Office of Rail Regulation in 2004 as its Head of Regulatory Economics.

A year later he became Deputy Director - Market and Economics, a position he held for seven years.

A ten-month stint as Director of Regulation and Market Reform at Water UK followed, before McMahon commenced his career at Network Rail in 2013 when he was appointed Director of Freight.

From September 2015-August 2016 he was interim Route MD for Wales, after which we switched to his current role as MD of the newly created Freight and National Passengers Operation.

FNPO: At a glance

12% of UK freight moved by rail

£30 billion of goods carried each year

40% of construction material in London arrives by rail