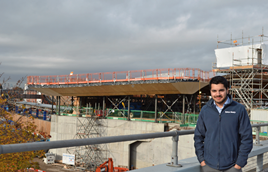 Tomorrow’s Engineers Week is an annual event that aims to shine a spotlight on engineering careers in a way that appeals to young people. By changing perceptions among school leavers, their parents and teachers of what for many has traditionally been an unfashionable profession, it will hopefully inspire hundreds of thousands of future engineers.

This year the event ran from November 7-11, with hundreds of schools, universities and businesses taking part - including Nestlé, Bosch, the Royal National Lifeboat Institute and the armed forces - to help combat the projected annual shortfall of 182,000 skilled engineers that UK industry currently faces.

To fully satisfy demand, the number of apprentices and graduates entering engineering roles has to double, making events such as Tomorrow’s Engineers Week all the more important.

In terms of railway engineering, there can be few better examples of what can be achieved by choosing a career in this burgeoning area than Crossrail, Europe’s largest construction project.

At a cost of £14.8 billion, it has already generated more than 600 apprentices throughout its supply chain, and opened the door to a new generation of skilled engineers who can now look forward to an exciting career based on their experiences.

Meanwhile, the Young Crossrail programme has worked with schools along the length of the route across London to encourage even younger pupils - particularly girls - to consider science, technology, engineering and mathematics (STEM)-related roles and become the next wave of apprentices to work on future projects such as HS2 and Crossrail 2.

A key part of the Young Crossrail programme has been the deployment of Young Crossrail ambassadors, chosen from the large pool of Crossrail apprentices. They share their stories in schools, and provide a more relevant perspective than could be provided by an external careers advisor, or even an older and fully qualified engineer.

One such ambassador is 25-year-old Akshaya (Ash) Chapagain, a graduate engineer with Balfour Beatty who first joined the company as an apprentice in 2013. For the past three years he has been based at Crossrail’s southeastern terminus Abbey Wood, a brand new surface station that is nearing completion ahead of the first Elizabeth Line services commencing in December 2018.

“I applied to join Balfour Beatty’s apprenticeship scheme in the summer of 2013, when I was an undergraduate and this place was just a car park,” he tells RAIL.

“We were doing surveys and counting parking bays, trying to work out how they were going to put in all this new stuff. So to see it now is mind-blowing.”

Born in Nepal, Chapagain was well versed in what to expect from a career in engineering, through following his father’s progress as a civil engineer. Due to his father’s work commitments he moved to the Netherlands when he was 13, and then the UK three years later to finish his schooling. He says that far from being disruptive in his formative years, it was this travel that sealed his own career choice, in addition to a tendency to excel at scientific subjects at school.

“Dad travelled a lot, which was a key reason I wanted to do civil engineering. I also liked technical subjects such as maths and IT, and to visualise stuff in my head and discover how it is created. You play with Lego as a kid and now I play with Lego for real, which I think is really cool.”

Chapagain completed a three-year degree in civil engineering at the University of Portsmouth, before embarking on a 16-week apprenticeship with Balfour Beatty during his final summer and then returning to the South Coast to study for a Master’s Degree. Having impressed Balfour Beatty as an apprentice, he was asked to return as a graduate engineer in 2014 after he finished his studies. Having already had a taste of what to expect, he has not been disappointed by the reality of working as a young engineer.

“I am a site engineer here, which means I do a lot of the setting out before construction, risk assessments, issuing permits, health and safety, ordering and logistics. I’m given a lot of responsibility, which is great for someone starting out, but obviously with adequate supervision.

“At first the long days were a bit difficult because of a tendency at university to stay up late and get up late, but then you get a natural alarm clock and you realise that people rely on you, so have a sense of responsibility and it becomes no big deal.”

Chapagain particularly enjoys railway engineering because of its multi-disciplinary aspect. And when comparing notes with his postgraduate contemporaries, who found roles on other projects after leaving university, he often feels fortunate to be in the environment of Abbey Wood.

“You can do anything here. On a residential project you might just be doing civils, but here we get a bit of civils, plus rail and signalling. The sheer variety of disciplines is what surprised me, as you get the civil guys and the electrical guys all coming in and it’s good to see it all come together. The teamwork is excellent.

“The element of not getting bored was a big element of my career choice, and I wasn’t wrong.”

With Crossrail now over 75% complete, and with ever-increasing numbers of contractors being released to other projects, Chapagain feels it has succeeded in permanently altering the traditional perception of engineering being a profession just for white, middle-aged men. He says the Young Crossrail programme in particular has now made engineering an attractive option to the whole cross-section of young school leavers, regardless of gender or ethnicity.

He concludes: “There have been some really big changes over the past ten years. I think unconsciously people are seeing girls and young people working on Crossrail sites all over London, and have thought to themselves ‘why shouldn’t I do that?’

“As an ambassador I can remember showing some kids round when we doing the CFA piling that takes mud out of the ground and pours concrete in at the same time. They had no idea that it could be done, and the element of surprise wowed them.

“When I was in Nepal and the Netherlands we did a lot of theory learning, so it’s good to see it being taught this way instead. Kids are often too young to be interested in hearing about job security and things like that, so my message is that you get to travel the world and that it’s exciting.

“Our task as an industry is to keep making engineering look cool, and we just need to keep pushing that.”