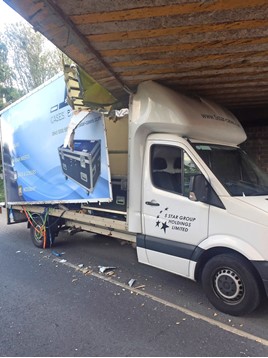 Since the turn of the century, there has been an average of 1,800 instances every year of road vehicles striking under- and over-line bridges on Britain’s rail network.

That equates to roughly five per day, posing an obvious and immediate safety risk to members of the public and both road and rail users, from damage inflicted to critical infrastructure.

It is also highly disruptive - on average, each bridge strike results in two hours of delays incurred to train services while examinations and/or emergency repairs are carried out, plus associated road closures.

Bridge strikes are also hugely costly, with each incident estimated to rack up £13,500 in expenses to NR through bridge repairs and the compensation it must pay to operators.

That compensation is known as Schedule 8 payments, which add up to almost £13 million per annum. Meanwhile, the wider cost to the national economy from bridge strikes is thought to be as high as £23m, once the value of undelivered goods and lost productivity caused by train delays and road congestion is considered.

With the annual number of bridge strikes remaining broadly unchanged since 2000, NR launched a new campaign in October to coincide with a statistical peak in bridge strikes.

Incidents have historically risen to ten per day during October and November, due to the clocks going back by an hour, and increased deliveries in the run-up to Christmas.

A national advertising campaign was launched in print and social media, with eye-catching straplines such as ‘What the truck?’ and ‘Lorries can’t limbo’, to make drivers of Heavy Goods Vehicles (HGVs) in particular more aware of the size of their vehicles, and to help prevent strikes.

It follows extensive research, commissioned by NR, finding that 43% of lorry drivers do not know the exact height of their vehicle, and that more than half do not consider railway bridges at all when planning their routes.

Further stages of the campaign will involve heavy engagement with some of the UK’s largest road hauliers (including Eddie Stobart, DHL and Wincanton) and trade bodies such as the Road Haulage Association, to ensure that the relevant training and support to drivers is made a higher priority.

Local authorities are being asked to ensure that road signs displaying bridge heights are correct and up to date, while NR is also calling for the much stricter enforcement of penalties for drivers when strikes do happen, in order to create a more effective deterrent.

Mark Wheel, Senior Engineer and London North Western Route Bridge Strike Champion, explains: “As one of the biggest Routes we have one of the biggest problems with bridge bashes. But each Route has a Bridge Strike Champion, and together we have contributed almost £200,000 worth of funding to this national campaign and the market research we’ve undertaken.

“There are so many agencies involved in this issue, but at the end of the day it’s about the driver knowing the height of his vehicle, and getting under the skin of the driver is an issue that’s never been properly tackled.

“Everybody seems to think it’s someone else’s problem, so we are taking a multi-agency approach and working closely with the Highways Agency and local authorities who are responsible for signage, but also many of the largest hauliers and enforcement agencies.”

Wheel says that more prosecutions will help focus the minds of drivers, while hauliers now have an added financial incentive to prevent bridge strikes. This is because NR is in a much stronger position to reclaim 100% of its costs, now that historical legal difficulties in recouping Schedule 8 payments from hauliers’ and drivers’ insurers have been resolved.

Successful court cases, including NR vs Conarken and Farrell Transport (2010) and NR vs Handy & Others (2015), have paved the way for negligent drivers and their employers to be fully liable for NR delays as well as repair costs. This is likely to increase insurance premiums unless they make greater efforts to reduce risk.

Wheel adds: “Historically, there has been a reluctance to prosecute drivers for careless driving and their failure to comply with road traffic signs. We’re not quite sure why, but we are working very closely with police, the Home Office and the Driver and Vehicle Standards Agency (DVSA) and traffic commissioners to toughen up on enforcement.

“In the claims world, there is this term ‘consequential loss’, and until 2010 we struggled to argue that Schedule 8 payments were included in this. Hauliers were happy to pay for repairs but not Schedule 8 payments, so we took them to court and won in 2010, and then on appeal in 2011 and again in 2015. The judge said ‘shut up and pay up’, so we now have legal precedence to claim it all back.

“There is a large financial implication to hauliers and drivers from this, so we’re now working with them to see if we can help them demonstrate to insurers some sort of bridge strike awareness or training, in order to reduce their premiums and the number of incidents at the same time.”

The final strand of NR’s prevention campaign is to encourage the development and trialing of new height management and route planning tools for drivers, as well as in-cab low bridge warning devices.

NR is also in the process of identifying high-frequency sites for bridge strikes, where it can increase headroom where possible or fit steel beams to reduce the impact of collisions and limit potential damage to infrastructure. So far 380 bridges have been identified, and interventions will be considered on a case-by-case basis.

Wheel hopes to achieve a 10% decrease in the number of bridge strikes from the campaign initially, but says that efforts will be sustained to ensure that the necessary behavioural changes from drivers are achieved over the longer term.

“There is no panacea for bridge strike prevention, but it’s about achieving incremental changes in behaviour which will build up over time. This is not a one-hit wonder, and it will now feature in our national campaign schedule alongside the regular work we do to tackle trespass during the school holidays and suicide prevention.

“Driving bridge strike prevention can be summed up very easily by the ‘Four Es’ - Education, Engineering, Enablement and Enforcement - and that is exactly what we will do.”