FROM THE ARCHIVES: A night to remember on new-look Sleeper 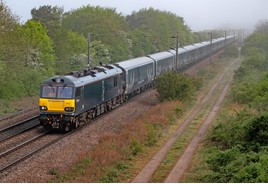 The sound of bagpipes is not something you usually hear at London Euston station. But that’s exactly what greeted passengers waiting to board the 2144 Caledonian Sleeper ‘Lowlander’ service to Edinburgh and Glasgow on April 28.

Regular users of the world-famous overnight services between London and Scotland (or ‘guests’ as CS now prefers to call them) seemed bemused at the presence of the lone piper, but this was never going to be an ordinary departure.

That’s because the 16 gleaming coaches at Euston were among the first of 75 Mk 5s ordered from CAF in 2015 to enter revenue-earning service.

An additional 16 were making their debut in Glasgow and Edinburgh, where they formed the southbound ‘Lowlander’ to complete the launch of the new £150 million fleet.

These inaugural runs had been long-awaited, having already been twice deferred by the operator - from April to October 2018, and then by a further six months.

Caledonian Sleeper New Trains Programme Director Magnus Conn was a little coy when asked by RAIL to explain the exact reasons for the repeated delay. Instead, he pointed to the overall complexity of the testing process, and gaining the necessary safety and regulatory approval since the first rake of Mk 5s arrived in the UK from Velim (Czech Republic) back in January 2018.

Conn probably has a point - these are the first coaches in the Sleeper’s 146-year history to contain rooms with double beds and en suite toilet and shower facilities.

Gone are the tired carpeted walls, harsh strip lighting and chipped enamel hand basins of old. And a new menu of Scottish delicacies (including RAIL’s choice of haggis, neeps and tatties) can be ordered in the club car or via room service from an upgraded kitchen, which features ovens instead of microwaves and the simple (but welcome) addition of a brand new coffee machine.

“We could have gone into service earlier, but we didn’t want to compromise anything when we didn’t feel the service was quite as well developed as we’d like,” explains Conn.

“New aircraft quite often take seven years to get approval, whereas we’ve had just three years from going from a piece of paper to getting it designed, built, delivered and in service.

“We’re going for the end of May to introduce it on the ‘Highlander’ , as it is a more complex operation that needs 22 shunting moves to join and split the train into its various portions. This is a new train, and we just need a bit of time to bed it in. We need to get experience first, and we need to get it right.”

The £150m order represents a significant reversal in fortune for the Caledonian Sleeper which, despite developing a loyal following among MPs, tourists, Scottish landowners and those from rural communities, has long required large public subsidy.

It was threatened with withdrawal by British Rail in 1995. The Scottish Government then flirted with the cheaper option of refurbishing the ageing stock while also making the necessary modifications needed to comply with new Persons with Reduced Mobility (PRM) technical standards, before announcing in 2012 that it would be completely replaced.

Placing the order fell to Serco, which commenced a 15-year franchise in 2015 having demonstrated its credentials operating the Ghan and Indian Pacific overnight trains in Australia.

Backed by £60m in capital grants from government, the decision was eventually made to procure stock that would not only bring Caledonian Sleeper’s accommodation in line with what had already been available in Europe for many years, it would also significantly raise the bar in terms of quality and comfort.

By offering a self-styled ‘hotel on wheels’ with the convenience of city and town centre-to-centre travel, CS hopes the much-improved hospitality experience will appeal to the business community, and the luxury international travel and upmarket tourist markets in particular.

But this improved quality has inevitably come at a cost, with prices starting for a club room at £205 and £335 for a double.

Classic rooms (which are not en suite) can be booked for £140 if travelling solo and £170 for two people. The previous option of sharing with a stranger of the same sex is now a thing of the past.

A cheaper seating coach has been retained (with prices starting at £45) and upgraded to include reading lights, charging point and an overhead secure locker for valuables. But that has not prevented accusations being made that CS is pricing out ordinary passengers who will now find it cheaper (and much quicker) to drive or fly instead.

Conn, however, maintains that the higher prices still offer excellent value money when compared with other modes of travel from London to Scotland plus the cost of overnight accommodation. He also points to various other non-monetary benefits to consider, such as being able to arrive refreshed and well-rested at your destination having enjoyed a full evening out before boarding, as well as the chance to experience a ‘once in a lifetime’ journey that features on many people’s ‘bucket lists’.

He adds: “We’ve been interviewed by titles including Vanity Fair, the Times and the New York Times, so there’s clearly a lot of international interest in addition to the UK press. Saying that, Government has paid £60m, so they want to see it being a success for everyone. And we still have a seating coach where tickets start at £45, so that we can still cater for everyone.

“We opted to go for new stock, as the figures needed to modify 40-year-old stock and the problems other operators are currently having to get their stock (PRM) compliant shows that it isn’t an easy thing to do.

“At the moment, occupancy can often drop to 50% in the winter. But we’d expect that off-season rate to go right up with this new stock, so a year from now I’m hoping that my biggest problem will be capacity, which is a great problem to have.”

According to Conn, another thing of the past is the violent shunting that traditionally woke people up at Edinburgh and Carstairs when portions of the ‘Lowlander’ and ‘Highlander’ trains split or joined.

He also hints at the possibility that more Mk 5s could be ordered should the Scottish Government throw its backing behind proposals for an additional route up the Far North Line to Wick and Thurso, where it would connect with ferry services to Orkney and Shetland.

The operator has no plans to retain any ‘legacy’ stock for use on this potential new route, and will therefore withdraw all its Mk 2 and Mk 3 coaches by the end of June.

“The Sleeper is known for the old couplings which have to be slammed together. But with the new Dellners, you don’t feel the shunt because they literally touch and kiss. Ride comfort and sleeping-wise, this is worlds ahead,” adds Conn.

“In terms of new routes, we need to get over this first. And then going forward we will definitely look at it, and if there’s an appetite then I think it will happen.

“Never say never , but it goes back to why we made this investment in the first place. Is it the right thing to do? I don’t think so.”

Despite the vastly improved service offered by the Mk 5s, their April 28 introduction into service was slightly soured when multiple signal failures conspired with a diversion up the East Coast Main Line for scheduled engineering to cause significant disruption.

Passengers arrived in London three hours and 20 minutes late and in Edinburgh more than two hours after their booked arrival time, forcing CS to offer full refunds for this inconvenience.

But for those who have used the Sleeper for many decades, or who plan to in the years to come, this will surely seem like a small time penalty to pay.