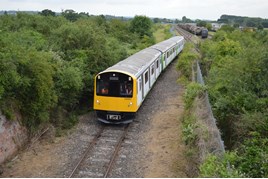 Vivarail has been developing proposals to include its modular D-Trains within the next Wales & Borders franchise, which commences in October 2018.

A document has been circulated to all four shortlisted bidders detailing the suitability of the trains - built from refurbished ex-London Underground vehicles - from a performance, emissions and value for money perspective.

Vivarail proposes to offer three-car electric multiple units for use on the Valley Lines. They would run to the outskirts of Cardiff using power obtained from a 25kV overhead supply, before running for approximately 40 minutes using on-board batteries to destinations including Rhymney and Merthyr Tydfil.

This would require short extensions of overhead line equipment to be made from Cardiff Central to the city’s northern suburbs, in order to provide sufficient charge to the lithium ion batteries. However, the proposal would negate the need to electrify the entire Valley Lines.

Vivarail says the first D-Train could be delivered nine months after receipt of an order, and could be fitted with diesel generator sets as an interim measure before being reconfigured at a later date when OLE is installed.

If OLE is never erected, the Long Marston-based company adds that batteries could also be charged from track level charging stations if required.

The three-car D-Trains can reportedly accommodate 404 passengers, are fitted with Wifi and USB sockets, and can be fitted with air-conditioning and a universal access toilet.

Vivarail Chairman Adrian Shooter told RAIL: “Having spent almost two years talking to a great many stakeholders in Wales, so that we could understand what they really want, we believe that we have a set of proposals which will enable franchise bidders to cost-effectively make major improvements to the quality of many train services in Wales.”