Sunak focuses on jobs, infrastructure and ‘levelling up’

Was this article useful?
6 people found this useful 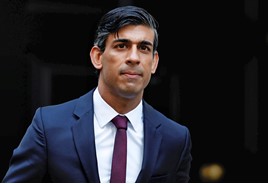 Chancellor Rishi Sunak has pledged to make a “once in a generation investment” in infrastructure as part of the national economic recovery from the Coronavirus pandemic.

The plans, which were announced as part of the Comprehensive Spending Review on November 25, include £100 billion worth of capital spending next year (£27bn more than has been spent this year) on building projects for schools, hospitals, housing and transport.

A £4bn Levelling Up fund has also been launched for local projects such as road bypasses and railway station upgrades, as the Chancellor looks to protect jobs and grow an economy that is predicted to contract by 11.3% this year and not return to its pre-pandemic size until late 2022.

The spending review was accompanied by the publication of the National Infrastructure Strategy, which had originally been expected in March before being delayed by the outbreak of the pandemic.

Designed to boost growth across the UK, support private investment and help the country meet its 2050 climate goals, more details are expected in next year’s spending review once key documents have been published - including the Union Connectivity Review and the Integrated Rail Plan.

Joining RAIL trom an editorship at a renewable energy magazine, Paul plans the features for RAIL and writes both news and features across a number of disciplines. He also plans our regular supplements and contributes to RailReview.