Simpson fears threat to freight from potential for ‘bad devolution’ 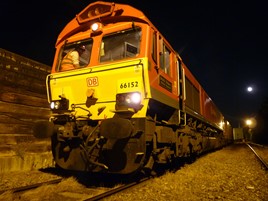 The needs of freight and other network-wide operators risk being overlooked in the drive to increasingly devolve decision-making to a local level, warns Director General of the Rail Freight Group Maggie Simpson.

Speaking at the Railway Industry Association annual conference in London on November 7, Simpson cited a Tweet from the Mayor of Greater Manchester Andy Burnham as an example of how freight might not be given the priority it deserves if increased control over transport is granted to local authorities.

Posted by Burnham in mid-October, the Tweet implied that freight should be barred from running through Greater Manchester at peak periods, in order to avoid congestion and to create extra capacity for passenger services on the local network.

“He has started his campaign for the devolution of powers by trying to chuck us out - and we now have a fight before we’ve properly started. The point is that there’s good and there’s bad devolution, and we need more of the former,” said Simpson.

“Our railway is a national network and freight flows cross multiple interfaces, so how can we make sure that we operate in that framework? I’m not sure we’ve quite got that yet, and we’ll be looking to the Williams Review to see how that balance is struck so we have more of the good and less of the bad.”