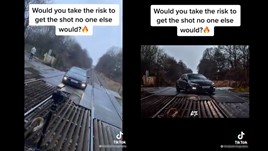 Network Rail, the British Transport Police and the Office of Rail and Road have condemned a video posted on social media platform TikTok showing a parked car being photographed on a live level crossing.

The footage, which was taken at The Oaks level crossing at Bromley Cross, Bolton, is being investigated by British Transport Police.

The user’s video appears to brag about the position they had put themselves in, asking: “Would you take the risk to take the photograph no one else would?” Other comments on social media appeared to show no understanding of the risks to those involved in the video or rail users.

Network Rail North West Route Director Phil James described the danger the person put themselves and passengers in as “sheer stupidity at a staggering level”.

HM Chief Inspector of Railways Ian Prosser CBE said of the shoot and the social media reaction to it: “The comments are disappointing. In 2004, we saw the dramatic incident at Ufton Nervet where a train collided with a stationary car, which led to seven people killed. This should act as a stark reminder to everyone, including the person who produced this TikTok."