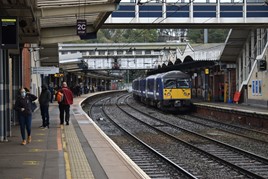 The Railway Industry Association has added its voice to calls for the Williams Review to be published immediately.

The trade body says it is urgently needed to provide certainty to the industry on structure and infrastructure plans, and to reduce market volatility.

As part of its submission on October 13 to the forthcoming government Spending Review, RIA also asked for an update to the Rail Network Enhancements Pipeline, the introduction of longer investment Control Periods (currently five years), and for a Rolling Stock Summit to be held with key stakeholders.

RIA Chief Executive Darren Caplan said: “The Government’s Spending Review offers an opportunity to place rail at the heart of the ‘Build Back Better’ agenda. To do so, the sector needs clarity and certainty on how the industry will change over the coming years, and future investment plans.

“We are yet to see the much-awaited Williams Review White Paper, and it has now been a year since the Rail Network Enhancements Pipeline was last updated, giving rail businesses visibility of what upgrade projects are being planned.

“Rail can support the UK’s economic recovery, but to do so it needs clear direction from Government.”