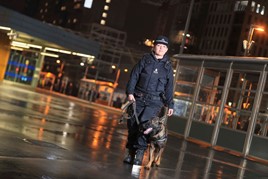 British Transport Police’s Firearms and Dogs Unit will be in action at this year’s Rail Live, which takes place at Quinton Rail Technology Centre, Long Marston, Warwickshire on June 20-21.

Event partner BTP has confirmed that it will stage a live demonstration of the detention of an armed person from a train, while serving police dogs and their handlers will be there to greet visitors.

Retired explosive detection dog Mojo will also be in attendance, having been memorably recognised with a special award at last year’s National Rail Awards (RAIL 837), for being first on the scene alongside PC Phil Healy following the terrorist attack at Manchester Arena on May 22.

Meanwhile, members of BTP’s Specialist Response Unit will also be on hand to showcase their specialist equipment and give an insight into how unattended packages, bags and substances are assessed for being lost property, or whether Explosive Ordnance Experts are needed.

During Rail Live, action-packed demonstrations will also be conducted by BTP’s Policing at Heights and Protestor Removal teams - to display the skills needed to safely remove a protestor who has trespassed onto a train roof, or protestors who may be blocking the railway, vehicles or a vulnerable site.

Railway crossing safety will be covered by BTP’s Special Constabulary, which will have one of its mobile safety vehicles on site and open to visitors.

The BTP’s Citizens in Policing team will be able to talk visitors through its current public information campaigns, while also highlighting volunteering opportunities and the role of the Special Constabulary.

To find out more about the fascinating world of forensic science, visitors can head to the BTP’s crime scene tent for a glimpse into the tools and methods used in the recovery of evidence from scenes of crimes and fatalities.

Last but not least, for businesses or individuals seeking advice on developing their international presence, BTP’s Rail Advisory Service will be available to share its wealth of knowledge and experience gleaned from being at the forefront of global railway policing for almost two centuries.

This year’s event builds on the popular plant show that has been staged at Long Marston for the past five years.

The National Rail Conference is also being staged at the event, with a high-profile line-up of confirmed speakers including Secretary of State for Transport Chris Grayling, and Network Rail’s Chairman Sir Peter Hendy CBE and Chief Executive Mark Carne.

Rail Live (and the NRC) is a trade show for individuals working in the rail industry. You will be required to register with a verified rail industry email address in order to attend. Go to www.raillive.org.uk to register.

"Our mission is to help get people home every day safe, secure and on time, and ensure the rail network in England, Scotland and Wales is safe and secure for industry colleagues and the travelling public.

"We police the journeys of over eight million people every day. In the past year alone, our officers have dealt with more than 400 fatalities and made over 1,900 life-saving interventions (in which a person is stopped from taking their own life) on the rail network.

"The past 12 months have also been incredibly challenging. Our officers were first on the scene at the terrorist attack in the Manchester Arena. At the London Bridge attack two weeks later, we helped to save the lives of many. Our officers were also heavily involved in the incidents at Westminster and Parsons Green, and our victim identification team worked around the clock in the aftermath of the Grenfell Tower tragedy.

"We continue to refine our skills and adapt our approach to ensure we meet the needs of a rapidly expanding rail network. Understanding the commercial pressures the industry faces and how policing can affect operational activity is integral to delivering an effective service.

"We are excited to be taking part in Rail Live 2018. Our officers are looking forward to showcasing their range of specialist skills and giving you an insight into the unique world of railway policing."