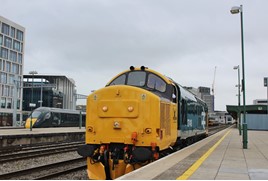 A shortage of rolling stock has forced Transport for Wales to use locomotive-hauled trains on the Valley Lines from May.

Class 37s and Mk 2s will be used on two peak-time duties on the Rhymney route, with each train having 220 seats - the equivalent of a pair of Class 150s currently used on the route.

This will free Class 150s and ‘158s’ to undergo internal refurbishment, enabling them to meet January 1 2020 accessibility deadlines. TfW plans to rid itself of its Pacer fleet as quickly as possible through a number of cascades.

While Riviera Trains is expected to provide the coaches, a TfW spokesman told RAIL that there are a couple of options for the locomotive supplier. It has since been confirmed that Colas Railfreight will supply the locomotives, and it has already sent 37418 to Cardiff Canton for crew training. It has two electric train heat-fitted ‘37s’ on its books (37418/421).

TfW has chosen Class 37s because they have operated on the route before, and are therefore tried and tested. They finished working for Arriva Trains Wales on the Valleys in December 2005.

“In addition to our £800 million investment in brand new rolling stock, we also recognise there is an urgent need to increase capacity on some of the busiest routes on our network,” said TfW Chief Executive James Price.