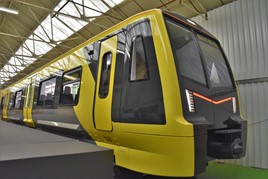 The first Merseyrail Class 777 bodyshell is due for imminent completion in Szolnok, in Hungary.

The operator has 52 four-car electric multiple units on order from Stadler, in a deal worth £460 million. The bodyshells are being manufactured in Hungary before being moved to Altenrhein in Switzerland, where the trains will be assembled.

They are due to begin entering service in early 2020, to replace Merseyrail’s ageing Class 507 and ‘508’ fleet. They will be owned by local transport authority Merseytravel.

“We’re in good shape and in touching distance of the end of the design phase, and manufacturing the first bodyshell. The first train will then be assembled over the winter and will commence static testing in Switzerland in February,” Merseytravel’s Programme Director of Rolling Stock David Powell told RAIL.

“All dynamic testing will then take place on our own network once we take delivery of the first train next June, which will then enter service in Q1 2020.”

All 52 trains are expected to have entered service by Q1 2021, with a new timetable introduced in May or December 2021 once all the old units have been withdrawn.