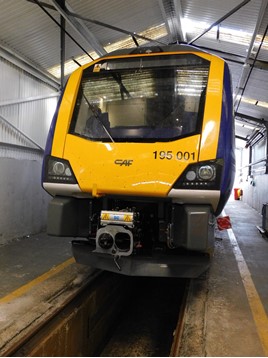 Train operators, rolling stock owners, train builders and Network Rail must work together to ensure new trains are compatible with the UK’s infrastructure and operational systems.

So says the Office of Rail and Road (ORR), following delays to a number of new train fleets. The latest involves the suspension of testing of Northern’s CAF Class 195 diesel and ‘331’ electric multiple units, due to issues with the inter-car couplings coming into contact with the bodies on tight bends. Northern believes the problem will be rectified in time for the ‘331s’ to enter traffic from May.

An ORR spokesman told RAIL: “Authorisation of new trains into service, in essence, covers compliance with the relevant Technical Standards for Interoperability (TSI).

“While these TSIs include safety, they are not intended to provide complete coverage of all of the health and safety. Their primary purpose is to enable interoperable train operation across Europe and remove barriers to trade.

“The TOCs/ROSCOs/train builders/Network Rail need to work together to ensure that the new trains are compatible with the UK’s infrastructure and operational systems. We have seen examples of builders providing trains that are compliant with the TSI but have serious issues when presented to the TOCs. TOCs need to take the lead, by ensuring that they have effective systems in place to manage the change brought by new trains.”

The delays to CAF’s Northern units is the latest in a series of delays to new fleets, with Caledonian Sleeper Mk 5s, TransPennine Express Mk 5As, LNER Azumas, London Overground Class 710s and Govia Thameslink Railway Class 717s all yet to enter traffic having been planned for introduction last year. Northern had also hoped to put three Class 195 DMUs in traffic by the end of December, but was forced to scrap that plan.