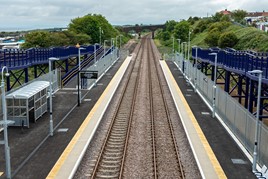 RAIL can exclusively reveal that the network’s newest station at Horden in County Durham will receive its first scheduled services on June 29.

Located on the Durham Coast Line, the £10.55 million development near Peterlee had been scheduled to open in May, but this was delayed due to the outbreak of the Coronavirus pandemic.

However, with firm government guidance in place on social distancing and for people to avoid using public transport where possible, enthusiasts are being urged to avoid visiting the newly opened station in the coming days and weeks.

Anybody visiting the site without a legitimate reason is likely to be refused entry in order to protect travellers and rail staff.

Speaking on behalf of the station project partners Durham County Council, Northern and Network Rail, a spokesman told RAIL: “We’re delighted that the station will open to rail services on Monday and, usually, we would want as many people as possible to head down to the station and see the project for themselves.

“In the current climate, an opening event is not possible. We would urge people to stay away to help protect the safety of those who need to travel and those working at the station.

“We will reschedule an official opening event and there will be a time in the future when people can come down and see the station. We look forward to when this is possible and welcoming all those who are interested.”

The station will be served by one train per hour in each direction between Newcastle, Sunderland and Middlesbrough. It had been expected (pre-COVID-19) to register more than 70,000 passenger journeys per year.

It replaces the former Horden station which was located approximately 200 metres further south (and closed as part of the Beeching cuts in 1964). It has been funded by Durham County Council with an additional £4.4m from the Department for Transport’s New Stations Fund, and a grant from the North East Local Enterprise Partnership via the Local Growth Fund.