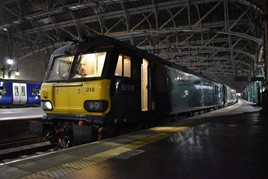 He was speaking on the morning that all Caledonian Sleeper trains were formed of CAF Mk 5 Sleeper coaches for the first time, powered by Class 73s and ‘92s’.

This was more than a year later than planned, owing to various problems with the stock. Mk 5s have been used on the ‘Lowlander’ service between London Euston and Edinburgh/Glasgow since April.

“This is the full deal. I have been hugely operational in my role, but now I can speak to operators from here and abroad, and we can grow,” said Flaherty.

He explained that the first night was marred by overhead wire problems in the Preston area that delayed the trains, while the Fort William portion of the ‘Highlander’ did not run because the West Highland Line was closed for infrastructure renewals.

The first Mk 5s to reach Fort William in passenger traffic arrived on October 14, with the southbound train that night the first to use the new coaches.

Last month, Flaherty had told RAIL that the new coaches would be in traffic on Sunday October 13. In the end, they were introduced slightly earlier.