FROM THE ARCHIVES: A few minor snags, but Sleeper takes a step forward 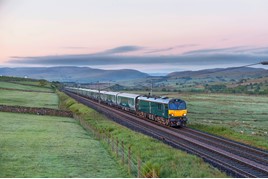 It wasn’t the most auspicious start to my first run on Caledonian Sleeper’s new stock from Edinburgh to London.

The company rang me that morning to say the coach I’d been booked into would not be running that night. I was given two options.

I could board at Waverley, ride to Carstairs in the seated coach or lounge car, and then claim a berth on the Glasgow portion. This might be at around 0130, CS advised me.

The second option was to catch a ScotRail service to Glasgow and board there. This seemed to be the better one from a sleep point of view - and sleep is usually scarce on the Sleeper, in my experience.

So it was to a chilly and wet Glasgow Central I went, to find (when I arrived just a few minutes after 2200), Caledonian Sleeper’s gleaming new stock sitting in Platform 10.

Although CS advertises the Glasgow portion as being available to board from 2200, tonight it wasn’t. There were initially no staff on the platform to explain the delay which, I later overheard, was the result of having to ‘reboot’ the train.

Eventually, the door buttons illuminated at around 2230 and passengers began to board. They found a clean and new train that’s a far cry from the Caledonian Sleeper’s ageing Mk 3 stock.

Nowhere is the contrast greater than in the lounge car. No more are passengers treated to a Mk 2 coach complete with its forestry scene in carpet up the walls. Sadly, the movable chairs have gone, replaced by bays of seats with high backs - reminiscent of the booths found in US bars. Also gone are the sofas (their padding had gone years before). Now there’s a long, serrated bar with individual fixed stools.

There’s an inevitable sterility with the new when compared with the old and crumpled. Those old Mk 2 lounges have witnessed many a world put to rights over a whisky. Their flexible layout encouraged impromptu conversations with strangers. I’m not convinced the new does the same.

What of the berths themselves? I was in a single en-suite berth. I can’t really describe what I thought the en-suite would be, but was surprised to find a wet-room shower and toilet squeezed into a tiny room. The toilet hides under a lifting shelf that doubles as a shower seat. Quite a neat solution, I reckon.

The shower itself is powerful enough and hot enough. It soaks the room, so I’d recommend using the toilet before showering and dressing in the morning. The berth itself has a small sink, too small really to wash your face in.

Passengers can now leave their berths locked if they repair to the lounge. These locks use card keys now popular with hotels. Railwaymen travelling can leave their ‘21’ keys at home - they’re now redundant aboard Caledonian Sleeper’s Mk 5 stock.

Missing from inside the berth are the coat hangers fixed to the walls of a Mk 3. That’s a shame, because it gives passengers nowhere to hang a suit or dress. My Mk 5 berth had simple mushroom coat hooks which were fine for coats but not good for a pair of trousers.

Indeed, storage is a weak spot of the new design. The Mk 3 berth had a wide shelf across the full width of the berth, of which half folded up to reveal a sink. There was another smaller shelf that could be pulled open alongside the bunk.

In the Mk 5 there’s a shelf that pulls out from under the sink. This is the only place for objects bigger than a mobile phone, wallet or purse that isn’t the floor (there are a couple of tiny pockets for small objects close to charging points). When your breakfast tray arrives, it’s the only place for it. At least this means you can eat breakfast while sitting on your bunk without having to twist your body round.

At the head of the bunk is a control panel for reading and berth lights, heating control and USB socket. The other end has three-pin and USB sockets, a call button and the window light switch. I found myself cold through the night, despite twisting the control to full heat.

My berth also came with a whistling of air from somewhere around the window that increased in volume as the train’s speed increased. This was distinctly annoying and not conducive to sleep, but perhaps shows that there’s still snagging to be done on these new coaches.

Whenever the train slowed, this noise reduced - to be replaced by a sloshing of water, which I guess is the downside of en-suite facilities. If you’re a light sleeper, you’re bound to hear the whooshing that accompanies the flushing of the next berth’s toilet.

One of the frequent criticisms of the older Sleepers was the snatching that came whenever the train started moving. I could barely detect it when we departed from Glasgow, so gentle was the motion. This is the result of the automatic couplers between each coach and which also couple the locomotive to the train. This is very impressive and a clear step forward.

Nor is there snatching as the train stops, although you can certainly feel the braking force as the train slows. Perhaps readers who drive trains can tell me whether stopping on a rising brake is still the right technique, because a sleeping car passenger struggling for sleep could certainly tell the difference.

The ride of my sleeping car was soft and bouncy at low speed, and became harder at higher speeds. Little can be done about the train traversing curves at speeds below which the track is canted. You will feel that you’re sliding one way or the other if you’re awake.

Watford Junction came with my alarm and the train running early. My Highland Breakfast arrived soon after. Sausage, bacon, mushrooms, tomato, potato cake and an omelette… and the thinnest slice of black pudding I’ve ever seen.

I have some sympathy with chefs trying to design a fried breakfast that survives being reheated in an oven. Airlines have the same problem (RAIL 852), and while Caledonian Sleeper’s offering was better than the one I tried from British Airways, it fell short of the standard that LNER passengers now expect.

There are other options - porridge, a bacon roll, blueberry smoothie or eggs royale. All come with a  Bad Girl Bakery muffin, says CS’s menu. Mine was missing, but my waistline tells me I didn’t need it. Coffee came in a pot large enough to refill my cup four times. This is good. Better would have been to supply four milk portions, rather than just two.

Most of my criticisms of my first Mk 5 journey come from snagging. My original coach being unavailable, the late boarding at Glasgow for rebooting, the whistling from around my berth’s window and the heating - all should be fixed with more experience.

But CS should really think about how to provide coat hangers. It dubs itself a hotel on wheels, and I’ve never found a hotel wardrobe without them. And somewhere to put larger objects that’s not the floor.

Overall, Caledonian Sleeper’s new coaches are a distinct and welcome step forward from its old Mk 3 stock. In going for new, CS has taken a difference approach to Great Western Railway, which has refurbished its Mk 3s. I now need a reason to head west to Cornwall.