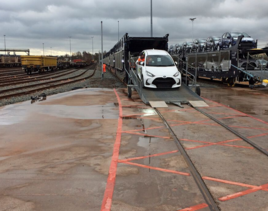 Following a series of trials, fully loaded trains are now operating twice a week between Toton, in Nottinghamshire, and Valenciennes, near Lens in northern France.

On the outward journey, up to 250 hybrid Corollas built at Toyota’s Burnaston plant are exported using a specialist wagon fleet. These previously mothballed wagons have been refurbished and modified by their owner Groupe CAT to take wider and taller cars, at a cost of £3 million.

For the return leg, an equal number of Aygo and Yaris models manufactured on the continent are imported using the same wagons.

The cars are loaded and unloaded at Toton from a new £2.6m vehicle storage compound that spans some 4.25 acres of previously redundant sidings.

The building work was commenced by Britcon in September 2021 and involved the import of 11,000 tonnes of construction material.

More than 800 metres of new track has been laid, 900 metres of security fencing erected, and several miles worth of cabling installed to facilitate all the necessary CCTV and lighting.  Additionally, 1,100 metres of road was built or widened so that car transporters can take the Toyota vehicles to and from the site.

The launch of the new service means that Toyota joins a small but growing list of DB Cargo UK customers to routinely use the Channel Tunnel.