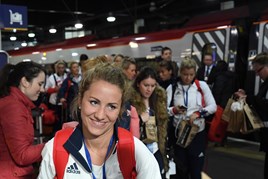 Network Rail, Virgin Trains, Caledonian Sleeper and GB Railfreight all joined forces on October 18 to facilitate the celebrations in Manchester and London marking Britain’s 2016 Olympic and Paralympic successes in Rio.

Both Team GB and Paralympic GB enjoyed outstanding Games, surpassing their medal hauls from the London Games four years previously (both were ranked second in their respective medals tables).

The athletes’ journey between the two cities was made possible by two chartered trains that ran from Manchester Piccadilly to London Euston, where a fleet of ten double-decker London buses waited to take over 350 of them onward to a parade at Trafalgar Square.