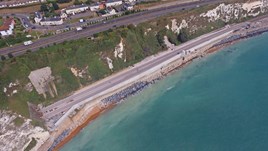 The railway between Dover and Folkestone will re-open on Monday September 5 following the completion of a nine-month repair project, says Network Rail. The line was closed on December 24 2015, as the result of storm damage to a supporting sea wall at Shakespeare Beach. Engineers and contractor Costain were originally targeting the end of 2016 to restore services, but reported last month that they are three months ahead of schedule (RAIL 806).

A new viaduct measuring 235 metres in length has been built across the damaged section of sea wall, supported by more than 130 concrete columns at a cost of £39.8 million. Some 130,000 tonnes of rock armour has also been used to protect the base of the viaduct from the erosive power of the waves.

An additional £3.5m has been spent to make the rest of the line more resilient, including brickwork repairs to Shakespeare, Abbotscliff and Martello tunnels as well as 11/2 miles of new track.

During the disruption, replacement bus services ran between Dover and Folkestone while passengers to other destinations were advised to use shuttle services to Ramsgate (for connection with Southeastern’s high-speed services to St Pancras) or alternatively to use services from Dover to London Victoria via Canterbury East. Free car parking passes were offered at Folkestone West, plus compensation for season ticket holders.

Following the September 5 re-opening there will be three Sundays of follow-up work required. Disruption to services is expected on September 11, October 2 and October 9.

Network Rail South East Route Managing Director John Halsall said: “On Christmas Eve last year, parts of the railway between Dover and Folkestone were completely destroyed. By Boxing Day engineers were on site, and since then they have been working around the clock to get our railway back up and running, completing this repair work in just nine months when a job like this would normally take two years.

“A huge thanks to the team for their hard work, and I also would like to thank passengers on this line for their patience while the railway has been closed.”

Charlie Elphicke, MP for Dover and Deal, added: “The work that has taken place in the last nine months is a tremendous piece of British engineering, and a tribute to the dedication of both Network Rail and Costain staff.

“The railway between Dover and Folkestone is a key method of transport for residents of Dover and Deal, and I’m delighted that it has been returned to them within a year of the line being closed.”