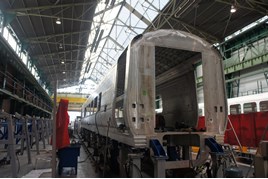 Caledonian Sleeper unveiled images of the first bodyshells for the MK 5 carriages, which are being built by Construcciones y Auxiliar de Ferrocarriles (CAF) in Beasain, Spain. They will enter traffic in 2018, replacing the existing Mk 2 and Mk 3 fleets.

Scottish Transport Minister Humza Yousaf MSP described the Mk 5s as “breathtaking”, he said they offered a “glimpse of what innovative and never-before-seen upgrades to services rail passengers can expect”.