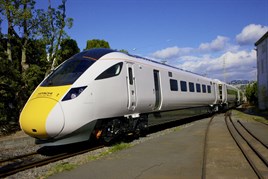 The first operational train in the £6 billion fleet of 122 Intercity Express Programme bi-mode multiple units ordered by the Department for Transport was exclusively unveiled for leading British railway journalists at Hitachi’s Japan factory in Kasado on November 13.

After a low-key ribbon-cutting ceremony in autumn sunshine, attended only by Hitachi staff and seven UK transport print and broadcast journalists, the first of the pre-series Class 800 five-car bi-mode electric/diesel multiple units (E/DMUs) moved a short distance under its own power as it emerged through symbolic white curtains.

This short demonstration run was powered by the so-called ‘donkey engine’ fitted to the bi-mode trains that allows the train to run on non-electrified lines for up to 30 minutes. Hitachi says that these engines, which can provide ‘hotel power’ to the trains in the event of a failure or if the overhead line equipment fails, can be easily removed as the electrified passenger network expands, converting the train into an electric multiple unit.

Train No. 1 is mechanically complete, but had only a single demonstration set of four First Class seats, fitted immedately behind the galley in the leading driving car.

Interior fitting and preliminary testing/proving will now be completed at Kasado in Japan, allowing the train to then be shipped to Southampton in March. UK testing will commence soon after arrival.

Hitachi plans to move the train to Network Rail’s Rail Innovation and Development Centre (RIDC) at Old Dalby. There it will undergo daytime testing, with night-time testing carried out on a Signal Protected Zone (SPZ) on the East Coast Main Line.

When the next two trains
arrive from Japan, Hitachi says that the plan is for them to also move to the RIDC.

Pre-series Trains 2 and 3 that are being delivered from Kasado will also be shipped to the UK for trials in the first half of 2015. The second train to arrive at Southampton will be a nine-car electric unit that will be tested on the ECML. The third pre-series train will be a further five-car bi-mode E/DMU.

Pending completion of the new Hitachi train asssembly plant at Newton Aycliffe in County Durham, a total of 12 trains (including the pre-series trio) will be built in Japan at Kasado to ensure delivery dates are met. The remaining 110 trains in the 866-car order will be assembled in North East England, once the County Durham plant is complete and commissioned.

Hitachi Rail Europe Chief Executive Keith Jordan told UK rail journalists at Kasado that the aluminium carriage bodyshells manufactured in Japan using Hitachi’s friction stir welding technique will be shipped into the UK through a convenient North East port, yet to be confirmed.

“Although the bodies will be built here in Japan, we have done our utmost to ensure that we have sourced UK components wherever possible,” he said.

“This means that the trains will be more than 70% British. This fleet is great news for British industry and employment - especially in the North East.”

Hitachi Rail Europe has now sourced all tier one systems on the train, having worked hard to identify companies within the UK who might be able to bid for contracts, the company says.

Of those parts, systems and operations that Hitachi Rail Europe could have sourced from the UK for the new trains, 72% have been purchased from UK-based businesses (based on contract value).

Hitachi Chief Operating Officer Kentaro Masai confirmed in a briefing at the launch that the company intended to build trains for the wider European market, so would transfer the friction stir welding technology and equipment to Newton Aycliffe.

The Class 800 trains are due to start running on the Great Western Main Line (GWML) from 2017, subject to completion and commissioning of the 25kv overhead electrification that is currently being installed.

On the ECML the IEP trains are due to be introduced from 2018, when the nine-car Class 800 EMUs will progressively displace the quarter century-old Class 91 electrics and Mk 4 sets owned by Eversholt Rail.

IEP will go into service at 125mph. But like the ‘91s’ and Mk 4s before them, the ‘800s’ has maximum design service speed of 140mph, should line speeds be increased following upgrades to infrastructure and signalling.

“Working with the DfT, we want to future-proof this train as far as possible,” Jordan told RAIL.

IEP technical, construction and mechanical design work has been carried out in Japan since 2005. Hitachi says the train interiors are being designed in the UK “to ensure the needs of British passengers are met”.

The company added: “IEP is to be a flagship train for the British railway network, and the DfT urged our designers to be as innovative as possible.”

The DfT’s IEP order for a total of 866 carriages includes 271⁄2 years of maintenance in bespoke depots currently being constructed/converted at North Pole, Stoke Gifford, Swansea and Doncaster. Depots to be converted are Neville Hill, Heaton, Craigentinny, Polmadie, Aberdeen and Inverness.

At the end of the 271⁄2-year contract, the Class 800/801 fleet will be owned and maintained by Agility Trains. The company will retain ownership throughout the whole contract and beyond, Hitachi Rail Europe told RAIL on November 17. 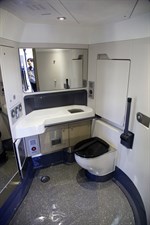