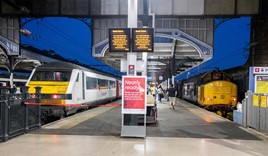 175 years of timetabled locomotive haulage on the Wherry Lines came to an end on September 21, with the final Class 37-hauled passenger train for Greater Anglia.

The introduction of Stadler Class 755 bi-modes means GA no longer needs the ‘37’-hauled short set that it has hired from Direct Rail Services since June 2015.

It also means that 58 years and nine months after they were first introduced, Class 37s no longer operate scheduled passenger service trains in England.