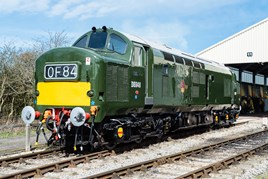 More than five years after it was withdrawn for an extensive overhaul, Class 37 D6948 is set for a return to traffic in as-built condition.

The locomotive is based at the Gloucestershire Warwickshire Railway. It is owned by four members of the Growler Group committee, and is under the GG’s custodianship.

It had worked on the main line between 2006 and 2009, when hired to West Coast Railways. That ended in May 2009, and after attending two galas at the Great Central Railway (Nottingham) it moved to Toddington in October 2009.

It was withdrawn in December 2010 for ‘Project D6948’, with the aim of returning the locomotive to its ‘as-built’ condition when delivered to Cardiff Canton on October 30 1964.

That work has included retro-fittting a steam heat boiler as well as a full strip down of the locomotive’s bodywork and cabs, fabricating and refitting original bodyside skirts, working headcode boxes, water delivery hatches and overhauling key components, as well as removing any non-original equipment added since 1964.