Serco confirms '90s’ for Sleepers until ‘92s’ prove their reliability 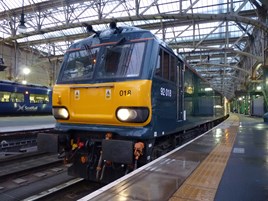 Serco has said that its Caledonian Sleeper operations will continue to use Class 90s hired from Freightliner “until we are satisfied that ‘92s’ can operate to the level of reliability required”.

The operator has signed a 15-year deal with GB Railfreight for crews and traction, with ‘92s’ booked to haul the Anglo-Scottish trains between London and the Central Belt.

However, several failures resulted in GBRf having to hire ‘90s’ from DB Schenker and Freightliner to cover for the ‘92s’. Additionally 86101 Sir William A Stanier FRS and 87002 Royal Sovereign, which are hired for empty coaching stock moves, have operated Anglo-Scottish trains instead of ‘92s’.

“There are two per night in operation. We are also using a Class 86 or ‘87’, and a Class 92 on the main electric legs of the Sleeper routes.”

Regarding how long the ‘90s’ will be used for, Clarke said: “As yet there is no finalised plan in place, as we are working with GB Railfreight on improving Class 92 performance, and we will continue to use Class 90s until we are satisfied that ‘92s’ can operate to the level of reliability required.”
She added: “There are no plans to replace the Class 92s with alternative traction - our focus is on tackling the recent issues, and providing a reliable and punctual service to those who use Sleeper services.”