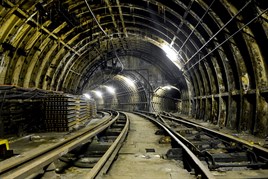 Should you ever find yourself standing on the Victoria Line platforms at Oxford Circus, be careful what you say. A few feet beneath you, an engineer may very well be listening to your conversation as you wait for your train.

Lying dormant, 70 feet under the streets of London, is (until recently) an all-but-forgotten railway. For 76 years the Post Office Underground Railway, known as Mail Rail since its 60th anniversary in 1987, transported mail 61⁄2 miles across London, from Paddington to Whitechapel.

It opened on December 5 1927 as a means of moving the post quickly between the main district offices of the Post Office, far from the congested streets above.

It was the world’s first driverless, electrified railway - a distant ancestor of the Docklands Light Railway - and the only purpose-built underground mail transit system in the world, transporting four million letters during a 22-hour operational day at its peak. By the 1990s, it was carrying six million bags of mail a year.

But use of the railway declined and the offices above ground started to close, making it an uneconomical option when compared with road transport.

And so, on May 31 2003, Mail Rail carried its last post (read the story of that final day in RAIL 745). The lights were shut off, the door was closed, and all work was abandoned. Three men have continued to maintain the line in the 11 years since its closure, but it has served no specific purpose since.

And that was how it might have stayed, until the British Postal Museum & Archive (BPMA) came up with a plan to tell its story. As part of a £22 million scheme to create a new national postal museum in central London, the BPMA will open up a section of Mail Rail to the public for the first time in its history.

The main postal museum and archive will be at Calthorpe House (on Phoenix Place, opposite the site of Mail Rail). This mid-1920s, red-brick building will be home to the museum’s collection, a search room for people wanting to research 400 years of postal history, and a studio for preservation and conservation of artefacts. A new storage archive repository that meets current standards for storing documents and artefacts will be built just behind it.

Across the road at the Mail Rail site, the BPMA wants visitors to understand the journey of a letter, and the importance of the underground railway in moving post not just across London, but also across the world, by transporting mail between distribution offices.

Its intention is to open this first part of the museum in 2016, with the hope of then offering rides on a section of Mail Rail’s lines from 2019. Last month the BPMA was awarded the necessary planning permission - all that is left now to make it a reality is funding.

The total Postal Museum requirement (including Mail Rail) is £22m, of which £17m has already been raised through a combination of the Royal Mail Group and Post Office Ltd, trusts and foundations, and philanthropists. The BPMA even sold duplicate stamps from its collection to raise funds.

Another £4.5m is awaiting approval from the Heritage Lottery Fund (a decision is expected in May), which hopefully leaves just £500,000 to source. The BPMA is keen to emphasise that the more funding the museum has, the better the experience will be, but £500,000 is the minimum needed to take the project forward now.

Visitors will be able to buy a ticket at the main museum in Calthorpe House, allowing them access to Mail Rail and the train ride. And when RAIL visited a couple of weeks ago, it was already easy to picture just what the experience will be like.

Bending to step through a low narrow door in the modern Royal Mail depot at Mount Pleasant, it almost signals the miniaturised railway within, before you’ve even seen it.

Down a flight of steps, and you reach the Mount Pleasant car depot. This was once a marshalling yard for the trains, but quickly developed into a multi-purpose workshop. Train cleaning and maintenance was done here, there were lathes and milling machines, a welding bay, and a motor workshop to enable overhauls to be carried out.

A 24-hour shift pattern was in place in the depot, because it was so busy in its heyday. And a total of 220 staff worked on Mail Rail, of whom 70 were technical grade (engineers, conveyor fitters and carpenters).

When the site is developed, a new opening will be created on the left-hand wall to funnel people into the space - this will form the queue line for the train rides. Projections and film will be shown while visitors wait, introducing them to the story of the railway and giving them an idea of what they’re about to see.

This space can also be used after hours for corporate hire, awards shows, dinners and lectures. The industrial atmosphere of the place would really lend itself to these types of functions, in a more inspirational environment than people are perhaps used to.

For now, however, this area is a treasure trove of the railway’s past: bars of QE2 soap, discarded boots, newspapers, filings from the last item on the lathe, even shower gel still hanging in the lockers. It’s as if someone said on the end of that last day in 2003: “Don’t come back tomorrow,” closed the doors, and left. There is even a cabinet with drawers full of plans and maps of the site, including a map from the 1950s showing plans to extend the line.

This had also been discussed when the line was first designed, and it was built with the idea that maybe it could be extended in the future.

There are even a couple of turnouts on the ends of the line, where additional tunnels could be constructed. The railway linked district offices across London, so the idea that it could extend to others had been considered, but nothing ever came of it.

Mount Pleasant is the centre of the network, and was traditionally used as the inland offices for sorting mail bound for other parts of the country. The next station down the line to the east, the King Edward Building, was used as the Foreign Section office.

From the queue in the Mount Pleasant mail car depot, visitors will board the train at the top of the incline, to take them down into the Mail Rail network and the tunnels beyond.

Bespoke trains will be needed for the visitor experience itself. When RAIL visited, we took a trip behind ‘The Banana’, as it was affectionately known to workers on the railway.

‘The Banana’ is a 350-volt battery locomotive from 1926. It was used to retrieve broken-down trains, and to transport tools and engineers across the network, right from the opening of the railway in 1927 through to its closure in 2003.

It was built by English Electric at the Dick Kerr Works in Preston, and was originally engineering green. It gained its nickname when it was painted yellow for an appearance in the 1991 Bruce Willis film Hudson Hawk, which used Mail Rail to represent the fabled Vatican Post Office Underground Railway.

Behind ‘The Banana’ is the only passenger car used on the railway. It was adapted from a prototype for new trains that were designed in the 1970s and introduced a decade later.

Clear plastic curves over one side of the roof, with the other side left open. The seats are almost on the floor of the vehicle, and are so small that it feels as if they were designed for children or little elves, rather than full-sized adults.

RAIL squeezes into the car, and is greeted by a most unexpected change in atmosphere as the train gets on its way, with the complete silence of before replaced by a haunting Leviathan-like screech and squeal of wheels on track.

The train will follow the route that the tour is likely to take when it opens (on approximately 1km (0.62 miles) of track around the Mount Pleasant site, see visitor experience diagram and panel).

The smallest part of the tunnel is just seven feet in diameter, so the sides of the train quickly become surrounded by the tunnel interior and clear the wall by a matter of mere inches at times. But somehow it does not feel claustrophobic, and the lighting creates an eerie and yet majestic feel to the place.

As the train passes through the tunnel, we pass brightly painted images on the walls, depicting the Twelve Days of Christmas.

These paintings date from the 1980s, when Mail Rail staff and their families were invited to a Christmas party in the tunnels to reward them for their hard work. The tunnels and platforms became a winter wonderland, with snow machines and light displays. Children were taken on a ride through the tunnels and past the paintings, to visit Father Christmas at the other end.

With this in mind, the BPMA is already thinking about the possibilities for special events at Christmas and Halloween, to make the most of the railway’s special character.

The train that will be used for the tours once the visitor experience opens will be different to the one in which RAIL travelled, but the BPMA says it does not want to lose the experience created by the current one.

A finished design for the new train (two or three will be built) has yet to be decided, but it will be suitable for a wheelchair and have a full curved roof to protect visitors. The BPMA agrees that it is important to retain the industrial feel, however, and not ruin the experience by making it too comfortable!

It has also yet to decide who should build the trains. On the one hand, the likes of Bombardier and Siemens, with experience of building trains for the London Underground, would make sense. But the museum is also considering companies that have experience of building other types of smaller vehicle. If the rest of the funding is received in time, the design process could start as early as this summer.

While funding is still needed, and the future of Mail Rail is by no means certain just yet, the enthusiasm and determination of the people working on the project is tangible.

Their tenacity for telling this secret railway’s story, and for sharing its importance in the history of posting a letter, makes it a project to really keep an eye on. RAIL can’t wait to see it shared with the public in just a few short years.