On track for Thameslink 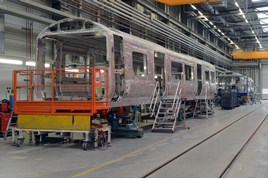 There’s a glimpse behind the trees, and a slight hum. Then it’s gone again. You would suppose that a 12-car, 240-metre Class 700 dual-voltage electric multiple unit would be hard to miss. But not at Wildenrath, close to the Dutch border in northwest Germany - here, surrounded by trees, is where the ‘700’ is carrying out its testing before coming to the UK.

The tale of getting the Thameslink trains ordered has been a long one. It involved the National Audit Office criticising the Government’s procurement process, and major political controversy when Siemens beat Bombardier to be named preferred bidder to the deal in 2011. But now, finally, the trains are being built and are due to enter traffic next year.

Ironically, Bombardier Class 387s are being used as an interim fleet on Thameslink until the ‘700s’ start arriving. The ‘387s’ were built in 2014-2015, and once the TL fleet arrives they will move to First Great Western. It is one big jigsaw puzzle.

The Class 700s are the second generation of the successful Desiro platform, and the first of the Desiro City UK trains to be delivered to the UK. A second order, for Class 707s for South West Trains, will begin construction in June.

Siemens is building the ‘700s’ in nearby Krefeld, a city of 250,000 inhabitants that is twinned with (among other cities) Leicester.

Its manufacturing plant is closing in on a century of production, and was the birthplace of the Class 185 diesel multiple units used by TransPennine Express, and of the Class 350/1 and 350/2 EMUs for London Midland (some vehicles were built in Prague). The Abellio Greater Anglia Class 360/1s were also mostly built here, although some vehicles were manufactured at Vienna in a similar process to the SWT Class 444s and 450s.

He explains that in the UK, Siemens’ revenue was £5 billion last year, and that the company here employs 14,000 people: “The ‘700s’ are a step change. We need to upscale.”

The first six at Wildenrath (700101-700106) are pre-series trains and are being used for additional testing. Already 700101 has accumulated more than 15,000 miles of testing - it has visited the Velim test track in Czech Republic, and to Vienna for temperature testing.

XLT Executive Chairman Andy Pitt, speaking in Krefeld on April 2, said: “The ‘700s’ will bring much-needed additional capacity into the system, but in an environmentally friendly way. And that’s because the trains are lighter and far more energy-efficient than previous generation trains. So that’s an advantage obviously to the passenger and also the train operator - the fact that they’re environmentally friendly and as good on track wear.

“They are very accessible and fully compliant with the latest disability regulations. This means that all passengers can use them, and that includes passengers with wheelchairs, bikes, buggies and luggage. So that is also a big benefit.

“Looking at it from an owner’s perspective, it’s very important that a train is capable of being easily adapted over the life of the asset, because market circumstances do change. I think you’ll see that the Class 700 is a very modular design, and that modular design will help the train adapt. It will make it easier to maintain and keep clean as well.”

Pitt is former managing director of SWT, where Siemens delivered 45 five-car Class 444s and 127 four-car Class 450s. He says: “Build quality and reliability are both extremely important for an owner, and I know from personal experience that Siemens has a good track record on both of those issues, when you look at the Desiro UK fleets.

“The Class 700 train has also had an awful lot of input from the train operator, which is good - an operational, customer-facing and engineering issue.

“It’s already building on a very successful Desiro UK platform, and has been subject to an awful lot of internal and external scrutiny. I think you’ll see that there has been a huge attention to detail on this train, which is impressive.

“So I’m very confident that the Class 700 train will have a good long-term future, and I’m really looking forward to the time that we can actually get them into passenger service in the UK.”

Iain Smith, Thameslink Programme Director, Siemens Rail Systems UK, was also in Krefeld. He spoke of how the trains will be used on the Thameslink network - from 2018, 24 trains per hour will run through the Central Core between St Pancras International and Blackfriars.