Why is GA going loco 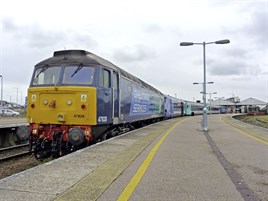 Locomotive-hauled trains running west from Norwich moved to Class 156 diesel multiple unit (DMU) operation in May 1988. Five years later, the final Class 101 first-generation DMUs in use in East Anglia were transferred to the North West, following the introduction of more Class 158s on long-distance inter-regional trains that allowed ‘156s’ to be cascaded onto local trains worked by the ‘101s’.

The only locomotives left working passenger trains would be Class 86s on Norwich-London trains, and one Class 47 working on summer Saturdays from the Midlands to Great Yarmouth. That was booked to end in October of that year, and then… that would be that, units would rule, and locomotive-hauled coaching stock (LHCS) would be a thing of the past.

At least, that was the plan! Twenty years later, and LHCS is still in action in the flatlands of the former Eastern Region. And what’s more, there will be diagrammed duties for at least 12 weekdays through this summer.

Why? Well, operator Greater Anglia is suffering from a shortage of modern DMUs, for a number of reasons.

One of GA’s fleet of five Class 153s will have to be out of traffic at any one time, for modifications to their sanders (RAIL 721).

But one of GA’s nine Class 156s will also be away at Railcare Wolverton at any one time, undergoing a C6X overhaul.

And of the 12 GA Class 170/2s, one is away at any one time receiving a refresh at Wabtec’s Brush Loughborough facility.

So, not for the first time, GA has needed to call upon Direct Rail Services Class 47s top-and-tailing Mk 3s. This style of operation has actually been in use for many years, culminating in 2003-2005 when Cotswold Rail Class 47s were used. But then it stopped - improved DMU reliability, combined with improved rostering, meant that LHCS was no longer needed.

But in 2010 it returned for several weeks (during which time a Class 20 even saw use on one day), and in 2011 LHCS returned for a period of six months. A further week or two of locomotive running then occurred in 2012, but that was supposed to be it… only, on April 10, it all started again.

Previously they had only been used, in theory, on peak-time weekday trains. This time they were pencilled in for additional off-peak trains, transporting holidaymakers to the coast, allowing DMUs to be deployed elsewhere.

The DVT is included in the formation because it has accommodation for the guard as well as a storage location for cycles. The two FOs are used because that is what’s available. Interestingly, the WiFi fitted to the Mk 3s is left switched on, which means travellers can enjoy First Class seating and free WiFi… much better than a second-generation DMU.

GA spokesman Peter Meades explains to RAIL why the ‘short set’ is being used: “It is the best way to maintain performance. The train is top-and-tailed because there is a lack of time to run round, and if you did run round then you would need to change the timetable.”

Unlike in previous years, the rear ‘47’ is left running, which means that it must be manned. That means two drivers - from a pool of 16 to 18 ‘passed’ to drive ‘47s’ - are employed on the train.

Surely that is more expensive then using a unit? Not so. “There are not really any additional costs involved in running them,” says Meades.

That’s because GA already has a hire agreement with DRS for Class 47s for standby duties, and that often sees two located in Anglia anyway. DRS also supplies a ‘47’ to haul trains during the summer between Norwich and Great Yarmouth.

Rumours constantly abound that GA will use locomotives other than ‘47s’ on these trains. DRS has a fleet of six Class 37/4s fitted with electric train supply, so the theory is that they could also be used.

This would prove popular with enthusiasts, but GA is aiming LHCS at covering a shortage of DMUs, rather than pleasing fans of the ‘37s’. Meades also points out that no GA driver is passed to drive a ‘37’ and that they are not on the operator’s safety case.

Last year two were used on additional trains between Norwich and Lowestoft, in connection with the Suffolk town’s air show, but they were crewed by DRS drivers. GA also has no plans to spend money hiring additional traction and additional drivers, when it can use its own crews to drive locomotives that it already hires.

The ‘short set’ is formed at Norwich Crown Point, and stabled in the Lower Yard adjacent to Norwich station. When not in use during the day, it often shuttled into there, and is to be found there on days when it is not in use.

Meades says that little notice was needed to press the LHCS into action. Usually it was known the night before whether it will be needed, although its first use on Saturday May 4 was because a Class 170 failed early that morning, forcing the ‘47s’ into action.

Just as little notice is needed to scramble the set into action, so little notice is needed for it to be replaced by a DMU. RAIL has travelled with it on two days (April 17 and 26), and on both days the last round trip to Great Yarmouth was covered by a single-car Class 153, rather than the LHCS that had been employed for the rest of the day.

GA has been forced to change the timings of these trains ever so slightly, because of the speed restrictions on the LHCS. In much the same way as the Summer Saturday turns detailed in RAIL 624, the trains are limited to 50mph because of the weight of the locomotives. The acceleration is also not quite as good as a Sprinter, while the overall point-to-point timings are slightly slower. This means a few tweaks have had to be made to the rural route’s timetable.

As for where the trains can stop, only Berney Arms (a request stop on the Reedham-Great Yarmouth line) cannot be served by the ‘47s’. Even Haddiscoe, where passengers access the train via the DVT, can be used, but the low platforms at Berney Arms rule it out.

With the ‘short set’ to be used on Mondays and Fridays, and a ‘47’ booked to haul London-Norwich trains that are extended to Great Yarmouth on summer Saturdays, does this mean that two sets of locomotive-hauled coaching stock could be out on a Saturday, with three ‘47s’ serving the coast?

That has not happened since 2005, and is a far cry from 1988, when as many as six or seven ‘47s’ could serve Norwich and Yarmouth on a summer Saturday.

Meades says it is not planned to work on a Saturday, and that Class 47 and crew availability could also determine it. He doesn’t completely rule it out, but says it is unlikely.

Then again, in May 1993 it was deemed unlikely that anything other than second-generation DMUs would be working these local trains…