Sent from Kent with a real team effort 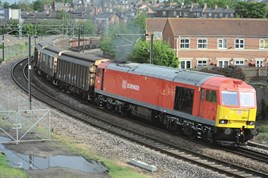 There is a ‘can do’ attitude in the railways, and it was on show throughout the build-up to Railfest. Nowhere was it more in evidence than when moving a Southeastern Class 395 to York’s National Railway Museum.

The fastest commuter train in the UK, this was the first time a 140mph Class 395 has been north of London.

And this was no simple move. The days of a train just running between different regions have long gone, and lots of planning went into ensuring that the six-car electric multiple unit could reach York.

The Class 395s are owned by Eversholt Rail and operated by Southeastern. Running predominantly on High Speed 1, the 29 six-car trains serve St Pancras International, to destinations including Ashford, Dover and Margate.

They have significantly cut journey times, and encouraged passengers to change their commuting habits away from ‘classic’ southern routes into the likes of Charing Cross and Cannon Street.

All 29 trains were built by Hitachi in Kasado, Japan, and are based on the famous ‘Bullet Train’ that operates in the home of the train manufacturer. The trains are maintained by Hitachi at a specially built depot at Ashford.

The pioneer, 395001, was delivered in 2007. They entered traffic with a shadow service from June 23 2009, launched by then Transport Secretary Andrew Adonis. The full launch of the new high-speed service was on December 12 2009, with then Prime Minister Gordon Brown there to witness one of the first departures.

This summer the Class 395s will play a vital role in transporting passengers between St Pancras and Stratford International, for the 2012 Olympic Games.

The man charged with looking after the trains is Fleet Engineer Matt Burgess. It is his responsibility to ensure that enough Class 395s are available - he must provide 25 of the 29 trains each day to ensure Kent’s commuters get to and from work.

Burgess is also currently overseeing the overhaul project on the trains. This has been ongoing for a few months, reducing the number of trains available by one, to 28.

And his task became even harder when one train, 395019, was selected for display at Railfest. Burgess is unsure why that particular unit was selected - it is not one of the trains named after Olympic athletes, and he suggests that the possibility of naming it was a reason why it was chosen.

“When you blazed it across the cover of RAIL,” he laughs. That is indeed true. RAIL persuaded the various parties involved to get the ‘395’ to attend the event. After all, Railfest is about record breakers, and the Class 395s are the fastest passenger trains operating on Network Rail metals (they do not travel at 140mph on NR tracks, but may well do so in the earlier part of their journey).

Southeastern Managing Director Charles Horton agreed to the request, and SET even part-funded the move of the train (to the tune of half the cost, which was estimated to have been around £20,000 in total).

This further reduced the financial burden on the National Railway Museum, and ensured that one of the iconic trains of Britain’s 21st century railway would attend the biggest rail event of the decade.

Now the race was on for Burgess and his team to ensure that the train could get there, and this involved a lengthy and detailed investigation of the route that it would travel.

Hitachi led the project, and worked with Lloyds Register Group to ensure all the relevant gauging work was carried out and necessary registration was completed.

The Class 395 was moved ‘unbraked’ (known in the industry as a ‘swinger’), which meant that it needed wagons to provide sufficient brake force. Network Rail policy is that for every unbraked vehicle being moved there must be three to act as brake force. This meant that (including the barrier vehicles) there were 18 wagons as well as the six Class 395 vehicles in the train that moved north on May 30!

DB Schenker was contracted to perform the move, and Burgess praised the freight operator for its professionalism: “We went to DB because it was so successful moving the units from Southampton.”

This refers to when the trains were first delivered to this country from Japan. Then, they were moved by rail (at a maximum speed of 45mph) from the Hampshire docks to Ashford, running north to Clapham before heading east to Ashford.

“John Ward, who is the Rail Solutions Manager Logistics, was instrumental in ensuring everything ran OK. Nothing was late. I have dealt with him from the beginning. DB has all the necessary equipment, such as the vehicles as well as the experience.”

DB provided a Class 60 for the move - 60015, which had been released from its ‘Super Sixty’ overhaul the previous week, and which was sparkling in the summer sunshine as it hauled the ‘395’ north.

The ‘60’ had also been involved in a complicated series of moves, having run light from Wembley to Eastleigh on May 29 to collect the two FIA barrier vehicles fitted with Dellner couplers that allow the ‘395’ to be hauled. It then made its way to Dollands Moor, where 395019 was waiting for it.

Burgess said it was always intended that a ‘60’ would be used for this move:

“It is relevant we use one because that was what we used for our testing. They are very good, and the crews using it at the time didn’t want to let it go!”

When the train ran it was fitted with a temporary pipe that led from the leading FIA through the nose cone of 395019, through its six vehicles, to the other FIA. This acted as the brake system. The ‘395’, meanwhile, was completely switched off with no brakes activated. Its pantograph was tied down while its shoegear was retracted.

“One of the main challenges for the move was running at 60mph,” said Burgess. “It cannot run in the ‘deflated’ position, so we have had to inflate them.” (This relates to airbags fitted between the bodyshell and bogie that help with the ride quality of the train - when they are in use they are inflated, when they are not in use, they are deflated.)

“This means it needs air reservoirs for the brakes, but most wagons do not have them. We have had to fit a main reservoir onto the locomotive so that it connects to the train.” This is a temporary measure, but one that was signed off as part of the approval procedure.

But what about the possibility of damaging the train? This was £9 million worth of kit that was being transported north, at Hitachi’s own risk, to be displayed for more than a week at a show. The last thing the company, owner Eversholt, operator Southeastern or the commuters who rely on it needed was for the train to be damaged getting to or from Yorkshire.

For this, Hitachi worked with Laser Rail, which has a Network Rail route model featuring cross-sectional information that shows the clearances in the ‘deflated’ and ‘inflated’ position.

Each train has slightly different dimensions, even though they all operate on the same 4ft 81⁄2in gauge, and this needed to be factored into the move. Class 170 and Mk 4 profiles were used as part of the work, and nothing untoward was found. One section around Hornsey needed a speed restriction of 35mph, but otherwise there were  no major problems.

Once the report came back, Burgess sent it to NR’s gauge engineer, who then approved the move by issuing a certificate - the train could not have run without this.

Next, Lloyds needed to carry out a fitness to run (FTR) examination. This was done at Dollands Moor on May 29, after 395019 ran south from its Ashford depot. Once the FTR was completed, a Network Rail Acceptance Panel certificate and transit certificate was issued… and the ‘395’ could go to York!

So how about the move itself? DB’s Class 60 left Eastleigh and arrived at Dollands Moor at 2227 on May 29. The train was then marshalled ready for the 0847 departure on May 30.

The ‘395’ ran from Dollands Moor instead of Ashford because, ironically, of clearance issues on the ‘classic’ route to London. Once the train was marshalled various NR control centres on the route were made aware of the formation, and it was all systems go.

It arrived at York at 1719, with Burgess on board. He admitted to being amazed (and impressed) by the level of interest generated by the move, having asked RAIL to get as many people lineside as we could. He was immensely proud of being asked to provide one of his trains, and admitted to liking the idea of one being shown off.

And how long did all this take? Said Burgess: “If you add all the hours up, two weeks’ worth of work. It was getting the brake calculations right that took the most time. The paths were straightforward. It was not just us that did the work, DB and Lloyds deserve so much praise, too.”

So here was an example of the railway working together, one where staff went above and beyond the call of duty to ensure that thousands of people could enjoy the sight of a Japanese-built 140mph commuter train, normally seen speeding through the lush Kent countryside, basking in the sunshine at York.

ν Turn the page to see the Class 395’s arrival at the National Railway Museum.