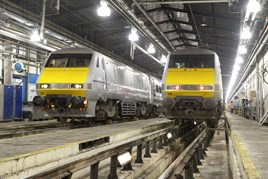 The most intensive diagram is BN405, which sees a Class 91 cover 1,335 miles in its day (see panel). It leaves Bounds Green at 0552, and arrives back there the following day at 0242. It visits Edinburgh on an out and back trip, and then Newcastle out and back.

Impressively, these trains are 25 years old this year. The first locomotive (91001) was delivered early by BREL Crewe on February 12 1988, almost two years to the day after they were ordered.

It was back in February 1986 that the British Railways Board announced an order had been placed for 31 Class 91s. GEC Transportation Projects Ltd was the main contractor, and designed, developed and delivered the locomotives. The main sub-contractors were GEC Transformers Ltd, GEC Traction Ltd and BREL, which designed and built the bogies and bodies. Final assembly took place at BREL’s Crewe facility, with the bogies completed at Derby Litchurch Lane.

The order was worth £35 million (BREL’s part of the deal was valued at £15m), and there was a further option for 25 locomotives, which was not exercised. The ‘91s’ would be capable of 140mph.

At the time, RAIL 79 wrote: “Never has a British locomotive been so thoroughly tested and evaluated before it has been built.”

While the order was for 31 locomotives, as part of the deal, an initial ten were to be built for extensive proving trials. Once these were completed, the remaining 21 were to be delivered following any modifications deemed necessary. It was intended that the initial batch would achieve 100,000 miles during test, with deliveries every two weeks.

The ‘91s’ were fitted with specially designed traction motors, a six-pole variant that delivered 1,135kW continuous rating (about 30% higher than the similar-weight four-pole motor fitted to the ‘87s’).

Considerable design work was required to reduce the unsprung weight, which was a weakness of earlier electric designs. When built, the traction motors on a ‘91’ were suspended from underneath the body, and drove bogie-mounted gearboxes via cardan shafts. This reduced the unsprung mass, and further reduced track wear.

Much of the engineering on the ‘91s’ came from research of the APT-P. Initially the Class 91s were branded IC225, as they were intended to operate at 225km/h (140mph).

A spare transformer winding to supply power was built into the design (for use on the anticipated West Coast Main Line services), and suitably equipped so that the Mk 4s could tilt. However, this was removed during a rebuilding project in 2000-2002.

Part of their design - and the reason for the power - was that as well as the expresses on the East Coast Main Line, it was British Rail’s intention that the Class 91s would haul 750-tonne Scottish sleeper trains on the WCML. In actuality the ‘91s’ have never had any booked WCML duties, apart from occasional runs (see panel).

According to reports at the time, the ‘ELECTRAS’ (as they were to be branded) would run on the ECML, but would not be capable of tilting.

The ‘91s’ were ordered for the electrification of the ECML, allowing BR to speed up services and cascade redundant High Speed Trains onto other routes, eliminating expensive and unreliable locomotive-hauled trains.

The first ‘91’ underwent testing at Derby and Old Dalby, before moving to Bounds Green (their base ever since) for testing. In the end it was to be almost 12 months before a ‘91’ hauled its first passenger train, while the first batch of ten underwent mileage accumulation.

Initially, they had a turn each day that would see them run to Peterborough West Yard and return. This normally terminated at King’s Cross Goods Yard, with a run round loop specially installed for this purpose. This avoided the need for the ‘91’ to be ‘trapped’ in the London terminus (because there was no driving van trailer, DVT, on the rear of the test rake).

These test runs were extended to Grantham, where they ran into the freight loop adjacent to the station. As the erection of overhead line equipment went further north, so did the ‘91s’, and August 11 1988 saw 91001 reach Leeds for the first time. Test rakes were also formed of Mk 3 Sleepers, rather than Mk 2s, and by August 1988, Class 43 HST power cars were used as DVTs.

By September 1988, as more ‘91s’ came on stream, so testing increased, with up to three trips per day between Bounds Green and Retford.

Class 91s were delivered to Bounds Green under their own power. They were sent up the WCML from Crewe to Stonebridge Park (near Willesden), from where they would use the North London Line to reach Bounds Green.

The first passenger run was the 1736 London King’s Cross-Peterborough on March 3 1989, hauled by 91001. Passengers were given flowers and champagne aboard what was otherwise a mundane commuter train.

Six months later, 91010 reached 162.8mph during routine testing on the main line at Stoke Bank. Hauling five Mk 4s on a damp Sunday morning, the ‘91’ achieved the record between Corby Glen and Little Bytham. Last year, at the locomotive’s naming at Railfest, the drivers exclusively told RAIL that they believed it actually travelled faster!

The next major milestone for the class was on June 10 1991, when 91009 worked the London King’s Cross-Newcastle, the first electric train between the two cities.

Electric services between London and Edinburgh were officially launched on June 28, only a few months after 91031 (the last of the class to leave Crewe) had been delivered.

Privatisation saw ownership of the class transfer to Eversholt Rail. They were leased by GNER, and received GNER blue.

February 16 2001 saw the first of the class unveiled following a heavy general repair that would transform their reliability. Alstom, Adtranz, AEA Technology and Interfleet Technology joined forces with the train’s owners and operators to improve the ‘91s’.

Externally two extra bodyside grilles were fitted, but internally they were heavily modified. The £30m project saw Alstom provide technical support, and AEA carry out the pantograph improvements. Adtranz was responsible for the overhaul and developed bogie enhancements, while Interfleet looked after the troublesome areas such as compressors, parking brakes and field contactors.

RAIL 404 stated: “Eight out of ten failures on Class 91s were caused by the sub-standard electrics. Relay problems were the third biggest cause of failures. With 34 neutral sections between King’s Cross and Edinburgh - where the locomotives effectively ‘switch off’ as they pass the dead section - wear and tear results in delays.”

Train Protection and Warning System (TPWS) was fitted, as was an improved cab layout in the No. 1 end. There were no major modifications to the No. 2 end (the ‘blunt’ end), because it is rarely used.

A more reliable choke system was installed, as was an air management filter box, while a new air-cooling system was fitted to prevent the ‘91s’ overheating. Gearboxes were changed, with a new design (by Voith) fitted.

A new silver look was applied to the class (this was later changed to grey), and now only a handful remain in GNER blue, albeit with a white stripe. Three locomotives have received ‘wraps’ (see pages 50-57), and more could follow.

East Coast acknowledges that reliability of the class is not as good as it was, but EC and Eversholt believe that work can be done on the locomotives to make them much more reliable. Whether that work is approved is unknown, because of uncertainties relating to franchising.

What does the future have in store for the ‘91s’? It seems inconceivable that should they be displaced by Intercity Express Project trains, they would be scrapped.

With plans for more routes to be electrified, and freight operators being encouraged to use electric traction, then a fleet of electrics capable of 6,000hp could be available, perhaps on the Midland Main Line. Whatever the case, the ‘91s’ seem certain to survive beyond their planned 35-year career.