Making the Mk 3s even better 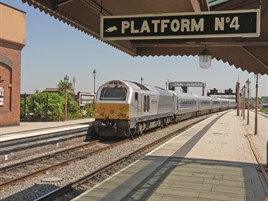 Forty years ago British Rail’s Mk 3 carriages made their debut.

They had been developed from the Mk 2s that were on order, and were originally designed to form part of the High Speed Diesel Train (HSDT). But quickly an order was placed to use them on the soon-to-be-electrified section of the West Coast Main Line north of Preston.

They were the first 23-metre vehicles in the UK (almost three metres longer than a Mk 2). A total of 848 were built, with many variations - the last locomotive-hauled Mk 3s were constructed in 1988 for use in Ireland, but electric multiple units using the design as a base were still being built in the early 1990s.

Pneumatic gangway doors triggered by pressure pads were also included in the design.

There were two versions of the Mk 3. The majority were used in the production High Speed Trains, while the rest were conventional locomotive-hauled Mk 3s.

The difference relates to the electrical supply. HST vehicles use an industrial voltage/frequency 3-phase supply directly from an auxiliary alternator in the Class 43 power car, which supplies components such as air conditioning. On the locomotive-hauled coaching stock (LHCS) version, there is a single phase 1,000V AC or DC train heat supply from the locomotive supplied through motor generator units. They are located under the floor and convert train supply to 3-phase 415/250V 50Hz AC, to power air conditioning and other ancillaries.

The vehicles are not compatible in traffic, but many former LHCS coaches have been converted into HST vehicles because of the need to increase capacity.

Despite the design being 40 years old, it is widely believed that it has yet to be surpassed. Vehicles are still in use across the country, with no immediate plans to remove them from traffic.

Intercity Express Project is on the horizon, and while this will see HSTs displaced from the East Coast and Great Western Main Lines, it is highly unlikely a fleet of coaches that have been refurbished within the past decade, and which each carry at least 70 passengers, will be sent for scrap, despite their age.

The reason is their popularity, something that Chiltern Railways has picked up on and is using to its advantage. The operator says that passengers find the vehicles comfortable - seats within the coaches are largely all around tables, there is plenty of luggage room, and they offer a smooth ride.

The major headache for operators is that the Mk 3s do not meet the TSI-PRM (Technical Specification for Interoperability for Persons of Restricted Mobility) requirements that will be enforced by 2020. The slam-doors, low back seats and grab rails all fail the specifications, as do the toilets.

However, Chiltern is rectifying this as part of a £6.5 million rebuild programme. Initially, plug doors are replacing the slam doors (RAIL 697), while the toilets have been removed and new modern facilities installed.

The low back seats remain with non-moving armrests, but the operator says that they can be replaced over a weekend, now that the major time-consuming changes to the coaches have been completed.

This work also has wide-ranging implications. Dave Hogwood, Chiltern’s Project Engineer, says that beyond the doors, the major work required is to repair corrosion damage. This will allow the coaches to remain in traffic for at least 10 to 12 years before the work is required again, and they could quite easily continue beyond that.

Passengers love these trains, he says, so why change them?

Malcolm Holmes, Chiltern’s General Manager, Mainline, agrees. He also believes that they are the best passenger vehicle on the rail network.

But why continue to use locomotive-hauled trains? Surely nowadays, purchasing diesel multiple units for the route would be better?

Not so. Economics dictate that it is cheaper to rebuild the Mk 3s than to order brand new DMUs. Indeed, because of track access and fuel costs, if a LHCS formation is more than five coaches (as they are in Chiltern’s case), then the costs favour locomotive-hauled trains.

The freedom to be able to do this is also a factor for Chiltern. The franchise is owned by Deutsche Bahn, which also owns the coaches. This means that vehicles can be tailored to exactly what the operator wants, rather than thinking about the re-sale value. No expensive engineering will be needed, again because this is what Chiltern wants.

Things could get interesting when the franchise is up for renegotiation, but that is not for a decade.

Of more immediate concern is the impact of this work on the industry. Should it be successful (and there is no reason why it shouldn’t be), then other operators will take a keen look.

A similar operation could easily be used on the Greater Anglia franchise, where there are ten rakes of Mk 3s each formed of nine coaches. Here a decision regarding the future is needed - this work will almost certainly be cheaper than buying either electric multiple units, or brand new locomotives and coaches.

Elsewhere, HSTs are still needed on West of England trains to Devon and Cornwall, while the future of the Midland Main Line, which also uses HSTs, is yet to be determined.

The work carried out on the Chiltern Mk 3s will certainly have an effect on the thinking of Government and future operators.

Has it made the Mk 3 better? Probably, but the potential is there for an even better vehicle.

Bicester Village, operated by Chiltern Railways, wins the Small Station of the Year category at the National Rail Awards.

The end is nigh for Chiltern’s ‘Bubble cars’

Oxford Parkway is the Medium Station of the Year. Here's why.