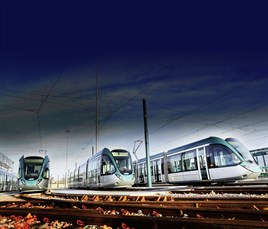 Britain’s metropolitan areas are embracing trams with a fervour not seen since Victorian times.

It is unlikely that tramways will return to every town that boasted one in the early part of the 20th century (the peak of the first-generation tramway). But the second-generation tram systems have matured to the extent that several systems are now looking seriously at fleet replacement, as well as major expansion.

Not a single major city that has reintroduced trams (or indeed, renewed its fleet in the past 20 or so years) has stood still. All are engaged in fleet updates of some description.

As a result, the UK is home to a modern fleet that is generally highly accessible and built to current standards, while retaining plenty of variety.

The current family of modern-generation tramways is typified by a mix of on-street and off-street running on reserved sections, some on new formations (Edinburgh). They enable the efficient moving of people in both city centres and densely populated suburbs, and even some areas typified by wide open spaces.

Since 1992, when Manchester’s Metrolink system first opened, Bombardier, CAF and Alstom have dominated the market (under various identities). The other major player is Italian manufacturer Ansaldo, although its fleets (supplied for Manchester and the West Midlands) are either mostly withdrawn or about to be withdrawn at the time of writing.

This year will be an exciting one for the UK’s tram systems, with three major extensions or new systems opening. At least 69 new vehicles will enter service in three UK cities in 2014 alone, with at least another 38 expected by 2016 in Manchester, Croydon and Sheffield.

In the meantime, it is highly probable that more trams from various manufacturers will be ordered, as systems continue to expand.

The resurgence of trams is just one part of the light rail success story of the past 40 years.

N The well-established Tyne and Wear Metro (opened 1980) and Docklands Light Railway systems (opened 1987) both use light rail vehicles, but cannot be considered trams in the same sense - they run on reserved track only (in some cases, former heavy rail alignments), and do not run on streets at all.