Javelin set to hit its targets 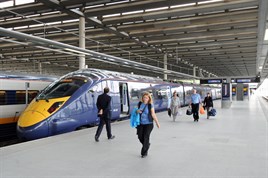 It is also the first Japanese train to run in the UK, its design incorporating much of the legendary Shinkansen ‘Bullet’ train thinking used on the land of the rising sun’s high-speed network.

The trains will operate between St Pancras International and Ashford on HS1, while also running on the ‘classic’ main line to Dover and Ramsgate. They will also serve London Charing Cross.

They were built by Hitachi in Okaido, Japan, and 29 of the dual-voltage six-car electric multiple units are being delivered. The first unit, 395001, arrived in the UK on August 22 2007, and was unveiled to an impressed media by then-Secretary of State for Transport Ruth Kelly at Hitachi’s new purpose-built maintenance facility at Ashford.

A further three units, 395002-395004, followed by the start of 2008, after which production was put on hold in Japan while testing was undertaken in the UK. Deliveries recommenced earlier this year, and there are currently 22 of the trains in the country, with the final shipload of ten on their way. They must undertake 5,000 miles of fault-free running before SET accepts the trains.

Full squadron service is planned for December 13 this year when Southeastern, which runs the trains, will launch a new timetable featuring the high-speed domestic trains.

But a ‘preview’ service has already begun, running between St Pancras and Ebbsfleet International during the off-peak, and to Ashford International in peak time. These were launched by Secretary of State for Transport Andrew Adonis on June 18, and started operating for passengers on June 29. According to SET they have been a success, with one peak-time train in each direction running full and standing, which has necessitated it running as a 12-car formation.

They run from a new station, to the east of St Pancras, that was briefly served by Midland Mainline when the main Barlow shed was initially closed for refurbishment.

There are four platforms, accessed by a lift or two escalators, with only a few seats and ticket barriers. These facilities may sound basic, and they are, but passengers can access free WiFi, and St Pancras International has many shops and facilities.

Currently SET is running a half-hourly service during the off-peak, departing at xx07 and xx37 from St Pancras, and xx33 and xx03 from Ebbsfleet. RAIL caught the 1407 to Ebbsfleet on July 13, operated by 395003.

The initial impression of the Javelins, as they have been christened, is good. I watched as 395002 glided in and out of the London station. It was quiet and visually impressive. Its acceleration appeared excellent - it was a case of ‘blink and you’ll miss it’. One moment it is standing ready for departure, the next it is gone. The only sound you could hear was East Midlands Trains Class 222 Meridians on the west side of the station.

Once aboard, the train is immediately impressive. It is light and airy. Access is via two single sliding doors on each side of each vehicle. They are 44 inches wide and on driving vehicles are at each end of the carriage, while on the other four coaches they are at 1/3 and 2/3 positions on the train.

These trains have 348 seats, and are aimed largely at the commuter market from Kent and the South East to London with the idea of moving large numbers of people quickly.

The seats are predominantly ‘airline’ style and feature cushions that are 171⁄2x17 inches. There are armrests between each seat, although like EMT’s refurbished Class 158s these are short and, in my opinion, do not necessarily offer the support required.

Sadly, like the majority of new trains, the seats do not necessarily line up with the windows, and indeed at the first table I sat, I turned to look out of the window and found myself staring at a pillar. This is a shame as some of the countryside the trains will pass through is very pretty and typically English, even if the industrial flatlands and tunnels of East London, which RAIL passed through during the train test, are not the most picturesque.

The desire to move large numbers is evident in the train layout, with few tables per vehicle, although there are more tables per six-car Class 395 than in the long-distance First Great Western High Speed Trains. While the longest journey on a ‘395’ is expected to be 80 minutes, the FGW HSTs run between London and Penzance.

There is no First Class on the ‘395s’; they are entirely standard class.

The London-end driving vehicle features a disabled toilet, as well as seven seats that could be used for wheelchair or pram access. The toilet is large and roomy.

Throughout the rest of the non-driving vehicles there are eight priority seats per vehicle for disabled passengers, but herein lies a peculiarity. Whereas any other train in the UK has these seats next to the door, the ‘395s’ have them at the back of the carriage next to the vestibules.

This seems a somewhat strange move, but SET assures RAIL this is in line with Disability Discrimination Act regulations. One carriage in 395003 was labelled incorrectly, stating that a pair of non-priority seats was, in fact, priority seats. This error was confirmed when checking 395004 and 395005 that were standing at Ebbsfleet International awaiting the evening peak.

The priority seating has a legroom space of 43 centimetres, whereas regular seating has 34cms. The former is not as roomy as some trains, with Bombardier’s Turbostars featuring a vastly larger space, but it is adequate. It also throws up a peculiarity, as all the seats have coat hooks on their backs apart from those immediately in front of the priority seating - these are narrower through the lack of an arm-rest which SET says allows access. A standard pair of seats with an armrest is 94cms wide, while those without are 90cms. And these seats, which back onto the bulkhead, also have coat hooks!

Airline seats are fitted with flip-down tables, which also have a cup holder. These tables measure 36cm x 24cm and accommodate an A4 pad, while my laptop fitted nicely.

The trains are fitted with power sockets, but these are below the seats, and there is only one provided per pair of seats. They are not well advertised, with no signs. Bearing in mind that commuters will be travelling on these trains, even for short journeys, it would have made sense surely to highlight where the sockets were.

Like Voyagers, Meridians and Pendolinos, the Javelins are fitted with electronic reservations above the seats.

There are two toilets per train, one in each of the driving vehicles. As mentioned the London end vehicle is fitted with a disabled toilet, while the ‘country’ end is fitted with a smaller facility. These are practical and feature motion sensor wash facilities. The taps are controlled by a sensor at the base of the appliance, instead of water jetting out from next to the soap above the sink as on other trains, including NXEC’s Mk 4s. This is a useful feature, as it makes washing one’s hands much easier.

The toilet door on the disabled facility is an electronic sliding door that is button controlled. And, unlike others, it closes behind the passenger, meaning there is no confusing button system seen on other modern trains. The second facility features a standard door opening mechanism with a handle and lock.

Both toilets have nappy changing facilities, but these score poorly as while they are secure and ample-sized, they have no straps to ensure the child does not slide around or fall off if brakes are suddenly applied. This fault has been found on many new trains, but has also been rectified by a number of operators, and it was a surprise to find the ‘395s’ did not have this feature. A mural above the nappy changing facility, as found on Pendolinos, would also be useful, as this would also keep the child happy.

Access between the carriages is through two sliding doors. This is a real advance on most modern trains, because when the button to open one set is pressed, both open at the same time, so passengers are not stuck between carriages, as has happened to me on Turbostars and older Class 365s.

The access button for these doors is low on both sides. Being grey, they can be lost in the shadows found at the vestibule area, but when not open they are lit up by green lights which go off when the door opens. This is a wonderfully simple and effective feature that should allow an easier flow of passengers through the train when boarding, or

looking for the toilets. The button is perhaps a little low, but then I am 6ft 2in. Out of use signs are also provided for the vestibules.

There are passenger information screens in each vehicle, and these also provide the carriage letter. The announcements are, as usual with new trains, pre-recorded, although manual announcements are also made.

The smooth departure of 395003 was noticeable, and although it is a new train running on a new railway, it was still a pleasant experience. The acceleration was noticeable, as was the absence of noisy air conditioning (a common complaint). There was, however, a rattle in a roof compartment, but this was only in one vehicle and was experienced in the tunnel.

Each vehicle has a luggage rack by the doors, measuring 62x78 inches. There are three racks per coach. Air-conditioning is fitted, and the train was a comfortable temperature even allowing for the warmth outside.

Throughout there was a feeling that the train was very solidly built. Everything seemed solid, hard and sturdy. We tried to bend things, but there was no give.

So what was the final verdict?

The train is well-built. It performs in a quiet and efficient manner, and looks the part. It has been designed with a specific purpose and the nature of the interior is perfect for that, with the large number of airline seats.

First impressions are important, and the ‘395’ takes your breath away with its acceleration and quietness. The lack of signage for sockets and the nappy changing facilities are rectifiable.

This is an impressive train, but I also think it is unfair, at the moment, to compare it against others in the UK. The ‘395s’ are brand new trains running on brand new infrastructure and therefore will seem incredibly impressive, so RAIL will update this train test when they start running on ‘classic’ routes to Dover.

RAIL Managing Editor Nigel Harris commented after the launch of the High Speed 1 preview service: “Although the Japanese-built Hitachi Class 395 ‘Javelin’ EMUs were unveiled back on October 2 2007, this was their first high-speed public bow after extensive testing of 4,000 trouble free miles per unit. And that bow was carried out with a flourish - you might even say a swagger.”

That last part, following our train test, sums them up: these trains are excellent.