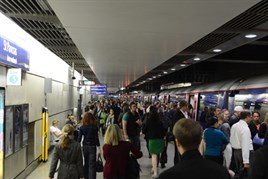 Day 3 begins in the huge subterranean box under St Pancras that holds the Thameslink station. Ten years ago this didn’t exist, and passengers used the cramped old station on the Pentonville Road.

The operator, First Capital Connect , is a train operating company that really ‘gets it in the neck’ on Twitter, and it is easy to see why. I had planned to catch the 0848 to London Bridge, but it is 15 minutes late due to “electrical supply problems”, according to the robotic voice that constantly apologises for the delays.

FCC missed a trick here. A recorded apology lacks all sincerity - you simply don’t believe it. It would be far better to have a real person. The delays mean there are no southbound trains through this important artery for 18 minutes, so when a 12-car Class 377 does turn up, it is rammed!

I manage to squeeze aboard, and spend the journey people watching. A young lady knitting catches my eye, as it’s a rare sight nowadays. Despite the Android invasion, BlackBerries are still popular in the capital (several are in use), and there is even one city Gent playing chess on an iPad. Technology has really changed the way passengers spend their time nowadays, and commuter trains are no longer a sea of broadsheet newspapers.

At London Bridge I change trains, amid a scene that I’d never have imagined in 2004. In the shadow of the new 308-metre ‘Shard’, London Bridge station is having a massive makeover.

The old South Eastern trainshed has vanished. In its place new platforms and canopies are appearing, although it is going to be another four years before the makeover (including extensive track realignments) will be complete.

In all my years travelling I’ve never seen such a pace of change on Britain’s railways, and it’s fantastic to see so many major projects under way.

Catching the 0921 to Dover Priory, we scurry through south London and a cityscape where little has changed except the house prices. My destination is Sevenoaks, but only to catch the next Southeastern service back to London, which proves to be a very busy nine-car train.

It carries a welcome trolley service, so I treat myself to a coffee, served by a cheerful young chap who sings while he works. Southeastern is hardly a glamorous TOC (although it does have the impressive Javelin service), but it plays a vital, if unsung, role in the economy of the South East. The quality of its service is certainly far better than its predecessor, Connex.

Back in the capital, another change soon has me heading through north London on an FCC train to Bedford. Signs of investment are evident here, too. At Cricklewood, workers are occupied laying new sidings with controlled emission toilets facilities, to cope with the new Desiro City trains. Further out, near Harlington, a fourth track is being laid on the Up side, using recycled sleepers.

My train terminates at Bedford, where myself and a few fellow passengers transfer to East Midlands Trains, catching northbound 222009. This is another quiet train, and it is easy to find a table seat, set up my laptop and connect to the WiFi.

EMT’s Meridians have been refreshed recently. They are comfortable trains, and the run to Leicester is an enjoyable trip, as is the return on the 1251 to St Pancras. The weather has brightened and the train is quiet, so I eschew the WiFi and watch the world go by. My eye is drawn to the many rail overbridges that have been rebuilt, ready for route electrification.

We flash through Bedford non-stop, passing ranks of electric multiple units prepared for the evening rush and hopefully a better performance than the morning’s service.

Back at St Pancras I have time for a stroll through the undercroft, allowing me to take in the sights and sounds of this stunning station. Nowadays there is often a musical accompaniment, from several free pianos strategically placed to tempt the artistic. For me, St Pancras reflects all the huge changes we’ve seen recently, and it’s an absolute gem.

My next station cannot be more different - Marylebone. It’s hard to believe that this vibrant and thriving station was once considered for closure and the railway leading into it converted into a busway. Privatisation and the advent of Chiltern Railways has revitalised both the station and the routes radiating from it. I have never seen the place so busy.

I leave on the 1445 to Birmingham, worked by a Class 168 that shows signs of a recent graffiti attack (a problem that’s thankfully far less common here in the UK than elsewhere in Europe).

The train is very busy, made worse by selfish people taking up seats with their bags, ignoring both the needs of others and how packed the train is. One teenage girl is too lazy to put her bag on the rack, and leaves it across a pair of disabled priority seats, until a determined older gent forces her to move it.