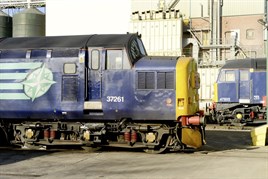 The one thing you don’t necessarily associate with a diesel locomotive depot is porridge oats. But the air around Direct Rail Services’ Gresty Bridge site in Crewe is thick with the smell of the stuff - the Mornflake factory is on the other side of the tracks.

RAIL was spending a day at Gresty Bridge to gain an insight into the work of the depot. The highlight of the day was due to be the arrival of 37402 and 37405 from overhaul at Barrow Hill at 1254, with Mentor Trainman Dave Bramley. But word reached us that problems with one of the locomotives had delayed the journey, and they were stuck in a loop at Uttoxeter awaiting the attention of fitters.

Gresty Bridge opened as a DRS depot in March 2007. A former wagon works, it became a maintenance shed for tampers under British Rail. It is not, contrary to popular belief, a former GWR shed.

The depot is very much a part of the community, not least because of Crewe’s proud railway heritage, with regular open days held. That’s in no small part due to the working relationship of the people who are based there - it is one of the friendliest depots RAIL has visited.

With a hi-vis and safety boots issued, and with a fresh brew, Business Manager Steve Finn introduces himself.

“The key business is the nuclear stuff,” he says. He describes it as one of four bespoke businesses in DRS, along with National Delivery Service work for Network Rail, intermodal work and charters.

Finn, whose role was born from Engineering Director Tony Bush’s decision to create a business development team, is concerned with the latter, managing customer contracts. Much of his role is about ensuring the Northern Belle contract runs smoothly. The current contract that DRS holds has three years left to run, until May 2016.

“We price the Northern Belle a year in advance,” says Finn. As for routes, he says: “They like to go to Carnforth , and the Hope Valley two to three times a year.” Finn also speaks of the need to avoid trains sitting for too long in loops in less attractive parts of the country.

Previously a production manager at LNWR, Finn is not a lifelong railwayman, having also been a mechanical engineer at a Crewe steelworks.

But while not an enthusiast per se, Finn’s pride in his work is unmistakeable. “We like to turn out the Northern Belle spotless,” he says. Finn has even been known to give buffers a coat of silver paint himself, just to be sure.

DRS has its own Mk 2 coaching stock, but this is currently being refurbished for use on Sellafield workers’ trains. A two-year contract with nearby Riviera Trains provides coaching stock for charters, while the ‘Belle’ is owned by VSOE. “Any charter enquiries I get, I send them to Riviera. We have an overriding contract,” Finn explains.

The operator provides trains for about 140 charters a year (100 of those for the ‘Belle’), except in January, which is a quiet time for the charter business. It also plans the routes, including liaising with major stations (a list displayed on the wall has station contacts for all the UK’s major stations) to obtain the necessary platforms and station staff when a charter arrives. Day-to-day organisation of charters means that NR needs eight weeks’ notice to allocate paths.

As well as Gresty Bridge, DRS also has depots at Sellafield, Carlisle, York, Inverness, Daventry and Stowmarket. “Carlisle men go as far north as Aberdeen, Fort William and Mallaig, while drivers from Crewe go down as far as Plymouth, Fishguard and Nottingham,” says Finn.

“It just takes a phone call to Riviera for coaching stock. We can respond within a day,” replies Finn. “The most I’ve ever turned out is six ‘47s’ in one day. The link structure at DRS contains all the men who do the charter trains. We split charters down into diagrams.”

Finn highlights the Wish Upon A Star charter from Manchester Victoria (scheduled for April 18). The charity aims to grant the wishes of children with life-threatening illnesses, and railway staff are only too happy to give their time for free. “They’re trying to raise £100,000 to send kids to Lapland,” says Finn. A £250 ‘Wish Express’ headboard was auctioned off.

Is there anywhere Finn would like to send a train where he hasn’t done so yet? No one signs Cornwall routes at Gresty, but he admits: “I would love to send a charter to Penzance.” He is also looking at the Central Wales line this year.

John Humphries is DRS regional operations delivery manager. He has worked on the railway for 19 years, starting on a youth training scheme in signalboxes on the North Wales coast. Working his way up to driving grade at Blackpool North, he’s been with DRS for 11 years. “I still have to drive a train once every eight weeks,” says Humphries, who has competencies on all traction.

The occasional interruptions by mobile phone calls highlight that Humphries is still very much ‘hands-on’.

“We all have our own customers to look after - I look after charter customers. We need to make sure that traincrew sign the routes,” he says. DRS uses cab passes for route knowledge with train operators.

It helps that the train-planning department is also based at Gresty, making Humphries’ life easier. Other regular customers include the Ministry of Defence at Plymouth. Generally, he says: “We need as much train capacity with train speed as possible.”

The conversation moves on to the exciting developments expected later this year. Sixteen brand-new Vossloh mixed-traffic Class 68 locomotives will be added to the fleet (RAIL 688, 706), with the first due in September. There’s talk of the Channel Tunnel being used to deliver the locomotives.

Although DRS has recently been busy scrapping stored locomotives of a 1960s vintage, Humphries maintains that “the ‘68s’ won’t replace anything - they’re a mixed traffic locomotive”.

The drivers’ manuals for the ‘68s’ are currently being written in Carlisle. Humphries says there is a “rumour” that one will be painted in Northern Belle colours.

Just outside, a building known as the Old Battery Room will be demolished, to make way for a new amenity block that Vossloh engineers will use for the first six months of the ‘68s’.

On the day of RAIL’s visit, Gresty Bridge housed some DRS locomotives employed on railhead treatment trains, and which were still awaiting a thorough spring clean.

There were also plenty of other locomotives ‘on shed’ - 37069, for example. Not much has been heard of the ‘37’ lately, but it has been restored to main line status for a new contract, based at Crewe.

Another interesting resident is Driving Van Trailer 82101 - this had been hauled to Crewe earlier this year from Wembley, where it had been on standby as the DVT for Virgin’s recently stood-down ‘Pretendolino’ set.

Humphries gives little away on the company’s plans for the DVT, stating simply that “the engineers are refurbishing it”. One possibility is that it might be used on Sellafield workers’ trains, instead of an extra locomotive.

The depot also houses several ‘57s’ (Crewe has all the engineering and maintenance plans for the ‘57/3s’), some of which are newly acquired. Team Leader John Hickinbotham is attending to the Dellner coupling device on the ‘57s’, used when the locomotives haul Pendolinos that aren’t otherwise able to run under the wires. Finn mentions that Hickinbotham owns a collection of vintage motorcycles, so no doubt attends to the ‘57’ with a high level of care and attention to detail.

With the ‘68s’ yet to arrive, and with its lines of Brush and English Electric traction standing in the yard, Gresty could almost pass for a smaller BR depot of the 1970s or 1980s.

So what kind of maintenance is undertaken at Crewe? A fitter explains that nothing that involves heavy lifting is done at Crewe - that’s the job of Carlisle Kingmoor. Instead, Crewe carries out ‘D’ exams (anything from compression to engine work), as well as ‘A’ and ‘B’ exams.

In front of the main building, DRS Driver Mark Baker lets RAIL into his ‘office’, and invites us to help start up a Class 37. Taking a moment to admire the solid 1950s English Electric technology, Baker, a driver of some 30 years, explains that some have modified cabs, “so it can get quite drafty”.

Leaving Gresty on a job involves traversing a ‘Z’ of track - a slightly awkward move. Some drivers are also rolling stock technicians - a useful element to their roles, as they are able to fault find and diagnose when things go wrong. Baker is also a mentor driver (new DRS drivers have to drive a minimum of 15 ‘turns’ before they’re let out on their own).

After lunch Trainman Mike Johnson pops by. Johnson has spent seven years as a trainman, and has never worked anywhere else.

He is involved in two very different sides of the business - passenger charter work and nuclear traffic. “I’m just learning the passenger side of things,” he tells RAIL. Both ‘commodities’ have to be carried with great care - and have very different needs.

“On the nuclear side we have to make sure we’re carrying the right stuff. Anything to do with the load and wagons is our responsibility. I do a bit of everything, although I still prefer the freight side of things.”

Johnson has just returned to Gresty, having spent the morning road learning between Liverpool and Manchester, and he is about to head off home. Like those of drivers, his shift patterns vary, and he can often start at midnight. “There are a lot of early and late turns.”

The highlight of the day is the delayed arrival of 37402 and 37405. The final two ‘37/4s’ to be refurbished for DRS, the locomotives eventually arrive from Barrow Hill at around 1500, having originally been due two hours earlier.

Tipped that they’ll be running through Crewe station, RAIL is encouraged to head back early for a better shot - but there’s no sign of them. Hot-footing it back to Gresty Bridge, the ‘20s’ that had brought them in (20308 and 20312) are still burbling away. Local interest has been aroused, with three generations of men in one family peering through the gates to see what’s new.

The ‘37s’ had been two of 13 bought by DRS from DB Schenker in 2011. They were originally destined for scrap, before engineers realised they were in far better condition than had first been thought.

Once at Gresty Bridge, both locomotives are put into store immediately - 37405 needs attention to its wheelsets, and does not appear in service for a while. It’s worth hanging around for… nothing beats the sight of a shiny blue overhauled locomotive.