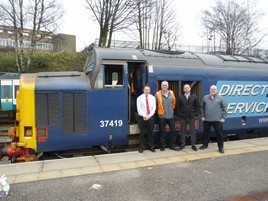 “They do not have to follow it to the exact. They must do it enough to make sure it works,” he explains, adding that the course was designed by DRS at Carlisle Kingmoor. “This is the best way to do it,” he believes, with this practicality far more useful than sitting in a classroom.

While Piggott is talking, voices can be heard from within 37419 as the trainees look for faults and check with each other.

Piggott seizes the moment to show off his prize-winning Montego van, painted in British Rail yellow, complete with BR arrow. It dates from 1992, so wouldn’t have carried that logo, but he’s immensely proud if it. “One of only 40,” he grins.

After around ten minutes, the trainees are confident enough to try and fire 37419 up. It starts first time. In fact, between them, they have only one question: where are the compressor cocks? The answer is simple… they don’t have one.

With the ‘37’ ticking over, stationary brake tests are carried out. Everything is as it should be. Piggott walks them around the locomotive, and within a short time they are done. “I maybe expected more of a quiz, but to be fair they know their job,” he says.

Back at Norwich, it’s time for the practical driving test. There’s a change of plan, with the ‘37’ running to Ipswich rather than Cromer and Lowestoft, which means it will run at higher speeds (75mph is the top speed for a light locomotive). It is booked to leave Norwich at 1010 and return from Ipswich at 1116. Mick Lloyd will drive it Up to Ipswich, with Mark Middleton driving it Down to Norwich. AGA’s Minder Driver Tim Thetford is the man in charge of training.

With coffee duly acquired (a ‘must’ for Middleton), the road is given for Lloyd to take the ‘37’ south. Middleton lets the handbrake off and clambers out to manually set the points from the Royal Dock at Norwich. There is a debate regarding which platform the ‘37’ will use at the Suffolk town.

Thetford explains that the maximum speed at which the ‘37s’ will operate on the branches will be 60mph. However, they will be used for empty coaching stock moves to Ilford, which will require 75mph running.

He explains the difference between the Westinghouse brakes on the ‘37s’ and the Davis & Metcalfe ones on the ‘47s’: “They are more responsive.”

Before he could train the other drivers, he underwent a traction refresher course with Piggott, and is full of praise: “He’s the most knowledgeable, I think. He’s superb.”

Thetford tells Lloyd and Middleton that when they return, they will sit their written exam.

This trip, he says, “is about familiarisation”, adding: “It’s good to get the basics. Mark has the experience, for example, but not on the main line. Mick and I had them 26 years ago. We thought that was it, when they went.”

Lloyd laughs at this. He has the ‘37’ powering along nicely, and chips in that he’s surprised how smooth the ride quality is.

There are green lights all the way south. The undulating nature of the route isn’t obvious as a passenger, but is very noticeable when travelling in the cab.

As Middleton is passed to drive 37032 on the North Norfolk Railway, what are the differences between that and 37419?

“The alternators and safety equipment on this,” he replies. A Welshman by birth, he’s looking forward to getting his hands on the ‘37s’. It’s the first new traction he has learned since Class 90s and Mk 3s were introduced onto the Great Eastern Main Line more than ten years ago.

Route knowledge kicks in as the drivers approach Haughley Junction. They ask about a temporary speed restriction that seemingly has been in place for a long time, to their disgust. Here we are brought to a stand as two Class 170s pass, bound for Ipswich and Cambridge respectively.

We arrive at Ipswich at 1103, and are put into Platform 1. It’s time to swap ends (the question of whether people want coffee is asked - Middleton says “yes” before the question is finished).

Lloyd will travel back in the rear cab. He says of his driving trip: “It is pretty much the same as before. They have got that familiar burble.”

At 1116 we set off, and Middleton accelerates once 37419 is on the Down Main. The ‘37’ doesn’t seem as noisy inside the cab as they do outside, but there is still a distinguishable roar. The acceleration pushes you into your seat, and Middleton is enjoying himself: “I have driven them for 18 years, and I have been looking forward to this,” he grins.

Thetford says: “All the guys have to do training with the stock. I will do that training with them. We have to do a proving trip. I think that it will be like the 15x fleet. I can run the ‘47s’ to ‘156’ timings now, but the ‘37s’ accelerate quicker.”

At Diss, the signaller phones the ‘37’ to ask Middleton where he wants to take 37419. Norwich is the answer and we continue on our way, but not before Middleton accelerates a bit.

Like Piggott, Thetford believes getting out on the locomotives is best: “You can learn a lot in the classroom, but nothing replaces seeing it in situ. The equipment on any diesel electric locomotive is similar. There are a lot of things they all have, but it’s where they are located.”

He says he prefers the ‘37s’ to ‘47s’: “I think the ‘47s’ were mass produced, and towards the end I am not sure they were put together as well. They are draughty, whereas a lot more thought went into the ‘37s’.

Thetford isn’t an enthusiast, but he does name his favourite class: “I spent most of my career on ‘31s’ in my early days. I have a soft spot for them. They were warm, and did what you wanted them to.”

Lloyd then takes the locomotive out of the station, before they head off for their exams. They both pass. ​