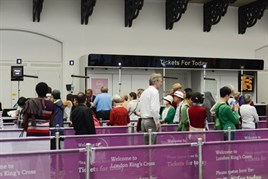 We approach Ipswich under more Mordor skies. Then the rain starts, and it absolutely buckets down! There’s not much to see outside, so I decide to test the WiFi and pay £2.95 for access.

Logging on is straightforward and AGA’s front page is informative, but the railways have got themselves into a real mess over WiFi (see panel, page 54), with some train operating companies charging and others offering a free service.

While catching up on my emails, I am momentarily distracted when a well-dressed gent behind me answers his mobile phone and I overhear him say: “Oh, just leave it and ask them to get the chauffeur out.” It’s not a conversation I was expecting to overhear in Standard Class...

Arriving at Norwich, I take a break to enjoy the momentary sunshine and literally recharge my batteries, before catching East Midlands Trains’ 1754 to Peterborough (worked by 158785). The unit is clean, and although it is busy I am able to get a seat.

The line to Ely has been resignalled with axle counters and modular signalling, although the station at Wymondham still looks timeless and the signal box is intact. It’s easy to see the attractions of the lightweight, ‘plug and play’ modular signalling - the problem is when you plug and it doesn’t play, as my RAIL colleague Richard Clinnick (a commuter on the line) regularly finds!

Passing Thetford, an attractive floral display and boarded up signalbox catches my eye. A few minutes later, a squadron of pigeons narrowly misses becoming kamikazes - they evade the ‘158’ at the last moment by curving away into a wheat field.

I have headed back into stormy weather, with a black sky ahead and a rainstorm sweeping by to my right. It’s lovely to watch from the comfort and warmth of my train.

As we swing left into Ely we pass the towering cathedral and cross the Great Ouse river, packed with pleasure craft of all shapes and sizes. The station is a busy and attractive place, festooned with planters that cascade a cornucopia of colour across the platforms.

After a reversal we head for Peterborough, running through what looks like fields of leeks and masses of potatoes. Ironically, despite the weather, farmers are busy watering their crops!

We make a brief stop at March station. Although most of the buildings are unused, it looks well maintained with all the woodwork recently repainted in grey gloss.

Racing on to Peterborough, we pull into a platform that never even existed ten years ago. And the bottleneck I wrote about then has gone. Network Rail has spent £43 million on new platforms, tracks, signalling and passenger facilities. I hardly recognise the place!

Sadly, I don’t have time to explore, so after grabbing a few photos I board First Capital Connect’s 1946 to King’s Cross, formed of a pair of Class 365s. It is a quiet train that had arrived as a busy 12-car.

I like these units. They are the best of the late British Rail EMUs, and I only hope that when their day is done here, they’re cascaded to the North West.

The weather makes for a dull, grey journey back to London, although I am kept amused watching a young woman opposite using her mobile to take ‘selfies’ to do her make-up.

Back in London, it’s time to call it a day. But what a place to end it - King’s Cross. The station has had a £550m revamp, taking it out from under the shadow of its flamboyant neighbour, St Pancras.

I love the sense of space and design of the new Western concourse, and I celebrate the end of day 1 with a pint in the restored Parcel Yard pub, before heading to my hotel and bed.

Day 2 begins at Caledonian Road & Barnesbury, on the former North London Line. This station has been extensively rebuilt as part of the London Overground, a scheme that has transformed what was a vital but neglected London artery.

I catch the 0845, which is hot, humid and heaving with people. It may be an air-conditioning fault, but they’re not normally that sweaty.

At Willesden Junction I change for a train to Clapham Junction. London Overground is a great success story. It has turned around Cinderella lines, introduced new high-capacity trains, enhanced timetables, modernised and staffed stations, and achieved impressive levels of punctuality. It has been a very positive decade of change.

Clapham Junction hasn’t stood still either. As well as new Overground platforms, the old footbridge has been refurbished with better waiting areas, more stairs and new lifts. And canopies have appeared on platforms that used to be open to the elements.