COMMENT FROM THE ARCHIVES: R873 - RDG proposals are a lifeline Government should seize 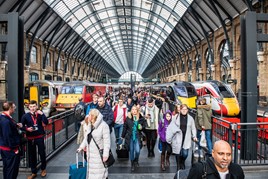 There are only two things that passengers really care about: fares and reliability. That’s it. There have been festering fares problems for donkey’s years, but they have been ignored by governments whose ‘smoke and mirrors’ dismissals have been assisted by the rail industry, which has generally failed to push back.

As long as reliability was there or thereabouts, the fragile system held together. Sure, we have the fare increase story three times a year (in summer, when the Retail Price Index rate that determines fare increases is announced; when the actual fare increase is revealed; and then finally, again in January when it is applied). There would be much heat from commuters at the increases and not a lot of light from government or industry beyond the “it pays for investment mantra”.

It cannot continue. After last year’s timetable meltdown, there’s no way that this toxic genie can be stuffed back in its bottle. Public, political and media fury rightly demands major change and the Williams Review is tasked with framing it. A new way of delivering the railway cannot now be avoided… and a radical fares review must be part of this.

The collapse of Thameslink and Northern timetables last year, plus fundamental changes in the way people use railways, mean that fares reform can no longer be dismissed by government, aided and abetted by the rail industry. Fear of ‘biting the hand that feeds’ by angering the DfT, from whom all franchises currently flow, led to the erstwhile Association of Train Operating Companies (rebranded Rail Delivery Group in October 2016) going along with various ‘window dressing’ fares/ticket reviews which achieved little.

Into this perfect storm, RDG has published its fares consultation findings, reported in news and covered by Wolmar. Fare Dealer Barry Doe’s forensic analysis follows in our next issue.

The RDG report is the best attempt I’ve seen to lay bare the inherent problems of complexity and confusion in fares, and to propose solutions. This is given impetus by the ‘burning platform’ of rapidly declining season ticket revenues - when you don’t have to ‘go to the office’ every day, then buying five days’ travel for the price of three isn’t required.

In 2017, season ticket sales slumped by 8.6%, taking £247 million out of the farebox. Season ticket sales fell by volume from 40.6% to 37.6%. The commuter financial model that the Treasury has lazily depended on for decades is in big trouble.

The big problem is the anomalies, complexity and restricted freedoms baked into the system by mid-1990s fare rules and regulations that cannot be changed.

Two of the biggest bugbears for passengers - which fuel endless damaging media coverage - are eye-watering fares and split ticketing. The London-Manchester West Coast fare is a hardy perennial, so let’s look at that - I asked Barry Doe to explain all!

Tap into a journey planner seeking a return ticket using a peak outward journey, with an open trip back, and those outdated legal
constraints mean that the only fare available is a whacking £350. This comprises two £175 singles.

But you could have opted to return on a cheaper off-peak train. Bought separately, that off-peak single fare would have cost just £88.60 - a total of £263.80, creating a saving of £86.40 on that £350 fare. But for all sorts of arcane, regulatory and franchise reasons (you cannot create a return fare where each leg has different conditions of travel), the system will not allow this - so you pay £350.

Also, thanks to those outdated 1995 restrictions, that £88.60 off-peak single is only £1 less than an off-peak return, which makes the £350 fare look even worse. If a new system allowed fully independent single-leg pricing, then a likely fare for the off-peak single would be around £50, leading to a yet lower total fare of £225. That would be a saving of £125 on that £350 fare - simply as a result of single-leg pricing. And Barry says a £50 off-peak single fare is a reasonable estimate, by the way, because any transition to a new system would have to avoid big swings.

Split ticketing is another perverse and toxic outcome of privatisation and subsequent consumer legislation. Where an operator sets a through fare (which it is obliged to do) that includes a section outside its area, it must set the fare for that ‘foreign’ territory - but is legally prohibited from knowing what other operators charge for that section! Confusing and contradictory fares inevitably arise.  Comprehensive and consistent, open single-leg pricing would deal with this, too.

A final word to those who claim that nationalisation is the answer. Remember that £89 off-peak Manchester-London return ossified by the privatisation regulations? Well, there is no way BR would have kept that - it would have soared rapidly had BR survived, especially after route modernisation.

When the East Coast was electrified in 1991, BR hiked fares significantly in view of the better service, and no one batted an eye. Virgin West Coast wanted to do the same post-2004 after the Pendolinos were introduced, but DfT refused. Thus, privatisation actually ensured many fares were kept artificially low while others did indeed soar - largely because operators were very restricted over what fares they did actually control. You’ll never read any of this in the Daily Mail!

A very important outcome would be an end to regulation of specific fare types and the imposition of a cap on overall revenues - giving operators freedom to charge slightly less on shoulder peak trains and slightly more on the first following off-peak trains, thereby creating effective transitional fares. Yes, there would indeed be winners and losers - but overall greater fairness would result, and we would see an end to half-empty late-peak trains and wildly overcrowded off-peak trains leaving just minutes later.

Government has been too scared to create this system for fear of political problems and driving revenues down, but that’s now happening anyway. The rail industry has been scared of upsetting the DfT, but keeping quiet is no longer an option in the light of last year’s meltdown. Everyone trumpets ‘putting passengers first’ - this perfect storm demands that government especially steps up and takes the tough decisions to actually do it. The RDG has done some extensive research and come up with some solid proposals.

As this page pointed out in RAIL 852 (May 2018), this is a “burning platform” and fares reform is urgently required. Now the RDG has not only agreed, it has helpfully provided a road map. Government must listen - and act rapidly and radically.