COMMENT FROM THE ARCHIVES: R871 - Time for really radical change 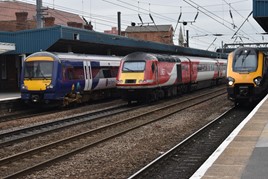 I don’t often say this (!) so make the most of it: I was wrong! Returning to work on January 2, I was resigned that the Williams Review would be a waste of time - we’ve had 30 reviews since 2006, and none made much difference.

The last major review was in 2004, which abolished the Strategic Rail Authority and passed its planning/franchise control powers to the Department for Transport. I’ve written a Comment Extra about how this came about and why it was a terrible idea. So, brew up, read that and then drop by again…?

Welcome back! I was wrong that this will inevitably be another waste of time. Note ‘inevitably’ because it might still turn out like that. But I now believe that the planets are at least aligned for significant change. If you agree that the DfT’s grip and micro-management must end, then pray that Chris Grayling stays in post as Secretary of State. Because all the indications are that he’s ‘got it’ and agrees. We have a Secretary of State who believes his own department’s grip is too tight.

Grayling is on record at a briefing at the last Tory conference, that he thinks DfT has too strong a hold on rail and wants it loosened. He even said that a new arm’s length specialist agency is needed to deliver rail policy. But surely, Sir Humphrey will stop all this…?

I’m not so sure. The vibe around DfT and among rail executives is that Permanent Secretary Bernadette Kelly also agrees with Grayling that civil servants’ role in rail needs to be cut back and pushed out to a new specialist agency, which would be accountable. I’ve never been a fan of Kelly since she sneered at National Rail Awards winners in a formal London speech to more than a thousand people - but she has served as Director General Rail at the DfT and appreciates from personal experience what an impossible job it can be.

The weakness of those 30 post -2006 reviews is that most were commissioned to tackle specific issues (some did generate limited positive outcomes). Only McNulty looked at the industry as a whole, but I believe got it wrong by making flawed comparisons with Europe, where costs were lower (according to those ‘in the know’ because of poorer maintenance).

Also, Government rarely opts for comprehensive strategic reviews other than when things are so badly broken they can’t be fixed (in every sense!) in any other way. Like now! Passenger numbers have doubled from 800 million since BR to 1.6 billion and there are tens of thousands more services. Rail is more stressed and congested than it has been for generations, and what’s needed is not central control, nor ownership changes driven by political ideology of right or left, but a structure which actually makes the railway work well at its interfaces.

And we must prioritise on passengers.  We spend billions of pounds on rail because it connects where people live or love with where they work, thereby driving the economy. Williams must come up with a structure which contracts outcomes not inputs - as the DfT has done, in a process of constricting Byzantine complexity in which subsequent refinements are well nigh impossible. Transport for London understands this and talks instead about customer satisfaction rather than performance measures - and with no discussion about ownership either. The best way to kill off the nationalisation argument is to solve the problems that spawned the current enthusiasm for it. If trains run well, no one cares and arguments in favour of public ownership will evaporate.

Most encouraging of all is that Grayling has promised not only radical and revolutionary outcomes, but a White Paper leading to legislation. No other review - not one  - has been formulated to lead to legislation and that is genuinely new and very exciting. This is why we need Grayling to stay precisely where he is to see this through. It is inevitable that even another Conservative SoS would have different ideas, let alone a Labour replacement, so if you want to see radical change, pray that no political problem removes Grayling - or Bernadette Kelly - from the DfT.

Ah yes, the DfT. I had completed my piece on pages 42-46, in which I largely blame “inexpert, here-today-gone-tomorrow” officials whose “lumbering bureaucracy” has led to “stultifying micro-management” which was always more about politics than policy. I knew I would not make friends at the DfT. So be it. RAIL will always speak truth to power.

Then, with my piece drafted, my jaw dropped when a new report from the Institute for Government arrived. It’s no lightweight at 76 pages - and it not only validated, but also explained, expanded and extended every criticism I had made. It’s timing could not have been more powerful. Here’s a taste.

“At a moderate level, staff turnover is healthy and refreshing. But when every year, crucial departments like the Treasury lose up to a quarter of their staff; when most senior managers leave their roles every two years, disrupting work and leaving ministers to maintain insitutional memory; and when, in just three years, multi-billion-pound projects can cycle through five project directors and whole policy teams turn over almost entirely, staff turnover in the civil service is not healthy but debilitating.”

Other devastating revelations include:

Oliver Letwin, a Cabinet office minister who worked across a wide range of policy areas in the Coalition Govement, said that too often when discussing policy, officials “just didn’t know what they were talking about”.

On page 28 of the report, a case study of an especially bad example is the 2012 West Coast franchise bid, which collapsed because of “the botched tendering process”, the abandonment of which cost £40m. The report observes: “DfT had four permanent secretaries in two years and multiple changes in directors general responsible for major infrastructure projects.”

The case to remove civil servants from close rail involvement could not be more powerfully made, by even the strongest critic.

There could not be a better moment to achieve the revolutionary change which the Secretary of State insists he wants to make.

This is a once-in-a-generation opportunity.