COMMENT FROM THE ARCHIVES: R870 - Long fare freezes don’t work ...but passengers deserved to pay no more in 2019 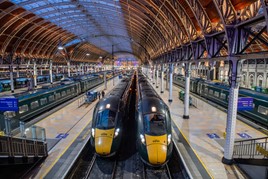 If you Googled ‘rail’ during the first week of this year, the search results were depressing. Page after page of ‘angry passengers’, ‘outraged commuters’ and ‘public outcry’ - hardly surprising given the biggest fares increase in five years (for regulated fares at least), at a time when the public’s relationship with the railways was already at rock bottom.

One in seven trains was delayed by five minutes or more in 2018 - the worst performance in 13 years. Rail had been savaged by timetable meltdowns, weather disruption and seemingly relentless strikes. And then the Government announced that fares would increase as usual in January. Is it any wonder that passengers are furious, when their already-painful commute is going to cost even more than before that truly miserable year?

Let’s be clear: RAIL’s view is that fares should NOT have increased in January.

Yes, running costs always rise with inflation. And yes, delivering improvements demands investment, which has to come from somewhere: the farebox or the taxpayer. You, in other words, just by different routes.

It’s an act of brass-necked gall for Government to argue that fare increases are the price of an improved service, given that it spectacularly failed to keep this same promise in 2018. Passenger anger is entirely justified.

With this ill-feeling in full flow (fuelled, as ever, by damaging media coverage), Transport Secretary Chris Grayling poured petrol on the flames on January 2 in an interview with BBC Radio 4’s Today, bullishly claiming that this fare rise was unavoidable in the face of pay demands by trade unions. Of course, pay increases play a part in rising costs - but only a part. This sweeping claim came across as nakedly political. As in all wars, truth is always the first casualty.

In the same interview, Shadow Transport Secretary Andy McDonald lambasted Grayling for “blaming workers” instead of saying that “the profits of the companies should be limited”. But just how much of the average 2% TOC profit (which often slips into loss) does he think should be “limited”?

These displays of political breast-beating generated more heat, but precious little light, and merely fuelled the public’s already distorted view of the way the railways are run.

Where promises of genuine improvement are kept, Grayling is right that measured fare increases help pay for investment. Freezing fares over several years is not a long-term panacea - it’s a dangerous short-term sugar-rush of pleasure with a painful price to be paid later. Just look at what London Transport Commissioner Mike Brown is dealing with.

London Mayor Sadiq Khan has frozen Transport for London fares for the third successive year, having committed during his election campaign that he would hold fares for four years. In The Independent on January 3, Khan argued that TfL services have improved despite his fares freeze.

Khan: “It begs the question: if I can freeze fares whilst providing a better service for Londoners, why can’t the Government do the same across Britain?”

Not only is this yet more overt politicking, to me it is disingenuous and dishonest.

When Khan took over as Mayor in 2016, his predecessor Boris Johnson had already agreed to eliminate the operating subsidy TfL received from Government (which was £1.1 billion five years ago), effectively removing the burden from the national taxpayer of paying for London’s transport networks.

Yet TfL’s costs have been increasing, just like everyone else’s. But it has not received a single extra penny from the farebox to compensate - and now it is receiving no money from the Government either. Stir in the 15% slump in passenger journeys over the past four years and TfL’s finances are mired in crisis. Brown always faced a struggle to make ends meet - now he’s in the wretched position of hanging on to two ends which are relentlessly moving apart. For Khan to claim that this model is successful, and one which should be replicated nationally, beggars belief.

Compound interest piles on financial agony rapidly - as it did for Stagecoach on the East Coast, with its 10% compound revenue targets. Over several years, the effect of freezing fares quickly creates a financial black hole.

In the short term, you can ‘get by’. But eventually those financial chickens come home to roost. Longer term, where is the extra money coming from to run the services?

Well, in London, it isn’t coming from anywhere. Which is why TfL’s latest business plan is being hollowed out from the inside, with big-ticket projects such as the Deep Tube programme and resignalling schemes on hold, delaying the benefits they would bring to passengers (Analysis, RAIL 869).

The short-term sugar rush of a multi-year fares freeze has a painful longer-term consequence. Yes, passengers might be happy with their fares freeze now, but it won’t take long before the deferment of major improvements bites and their mood will change. Khan is guilty of skating fast over thin ice, and it is madness to suggest that we follow this policy nationally. In a recent interview with the BBC, the Mayor refused to pledge a further fares freeze in the next mayoral election in 2020. I wonder why, if it’s such a great policy that he wants to inflict it on the rest of us!

Johnson was re-elected as Mayor in 2012 having increased fares during his previous term - because people were generally happy. Raise fares reasonably, then improve services - this is the only sensible way forward.

But when Government fails to deliver better services, and hikes fares regardless, it plays into the hands of Labour’s nationalisation argument by invoking the wrath of a public already disillusioned with the current system. The overwhelming message to the public in the mainstream media is that privatisation is to blame and should be reversed.

Long-term fare freezes are disastrous - as TfL is proving, whatever ludicrous claims the Mayor is making. But to maintain public faith, Government should have taken it on the chin this year in recognition of how badly passengers were let down in 2018. That would have been the right thing to do. But the DfT cynically squeezed harder. That was the wrong thing to do.