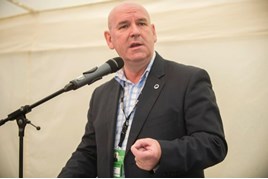 Mick Whelan is not quite what you’d expect of a trade union leader. For a start, there’s just as much football memorabilia in his office as there is union history, although his office (just around the corner from London’s Farringdon station) is still adorned with banners and mementos of industrial struggles past.

There is no doubt that this is the office of a senior trade unionist, although an hour’s conversation with Whelan reveals that he couldn’t be further from the traditionally-portrayed caricature.

Aside from his clear passions, his focus as General Secretary of the Associated Society of Locomotive Engineers and Firemen (ASLEF) is purely about representing Britain’s train drivers - an occupation that has changed a great deal even in the 34 years that RAIL has been in existence, and massively so since the end of main line steam.

“Our identity is very much around train drivers,” says Whelan. “We do work with other trade unions, but we have defined policies of our own.”

While in the past there have been loose federations of rail unions, Whelan asserts ASLEF’s specific role within the wider rail industry - and speaks with passion and quite a bit of personal knowledge and experience about the role of the train driver, both today and in the past.

“There is a real identity among our membership. It is not a transferrable skill - you are either a train driver, or you are not. We’re a craft trade union. I try not to use the word professional too much, because it gives the wrong impression.”

Although undoubtedly a train driver has to be seen as professional, in order that he or she has the confidence of the travelling public, perception matters. So what does Whelan believe is the public perception of his union?

“People do have a vision of trade unions. It’s a different world. We are still (because of what we do) incredibly blue collar. Our people are very community-based. There are areas where there are still railway towns, where the main employer is the railway.”

But Whelan also believes that ASLEF exists as a pressure group, as much as anything else.

“We want investment in the industry. We do see it as a safer, greener option. The real problem is that we don’t see it as a long-term strategy from governments of any colour, looking 20 or 30 years down the line. In those areas, we very rarely get reported unless it’s to be negative - they will use one line out of context.”

That doesn’t dampen Whelan’s pride in the profession or, as he puts it, the craft of a train driver.

“We have a vision that we are stakeholders in the industry. No matter what system or model you have, it doesn’t happen without us working in partnership with the industry itself. And we do. At times like Hatfield , we would have had no railway system if we hadn’t kept the trains running.”

For Whelan, this is an example of ASLEF not getting “kudos” for when it works well with the wider industry. For example, the London Olympic Games in 2012 met with press stories about “trade union barons demanding money for flexibility”, to which Whelan responds: “In any walk of life, when people do more, you expect recompense for it.”

That approach goes with London Underground’s plan for the Night Tube from September this year, with all-night running on most lines.

“You don’t make a bland announcement that you’re going to start in September, and start talking about it in March, and then when you’re worried about the truncated timescales not working, start putting the blame on the people you’re going to need to negotiate with to get where you need to be. It’s intriguing how all this gets leaked. They want people to do more, but we are condemned.”

He adds: “We see projects like the 24-hour Tube as an opportunity for growing our membership base. If you’re going to run more trains more often, I would expect more train drivers, not less.”

However, Whelan has concerns about the safety risks that the Night Tube may represent.

“How you could do it safely without importing risks of fatigue or whatever, without stretching the basics that you have, I don’t understand. I wouldn’t expect the existing workforce to go beyond - they’re stretched now by what they do.”

Whelan notes the considerable amount of money for investment within the Tube, “which again we welcome”, adding: “I want better trains. I want better services. I want safer railways. But when it comes to the manning of them and how we’re going to resource it, that becomes a different question.”

There is undoubtedly a need for more drivers. But how do you make sure those new drivers are drawn from diverse backgrounds?

Whelan points out that 2015 marks the 15th anniversary of what ASLEF calls its representative committees - its Womens’, Lesbian, Gay, Bisexual and Transgendered (LGBT) and Black and Minority Ethnic (BME) group.

And drawing on an internal study from 2012, he believes that the railway should reflect the communities that it is drawn from.

“It showed how poor we were as an industry. The reason we did it was that we wanted to hit the HR directors. We have 95% density - virtually every train driver in the UK is a member of ASLEF. We’re willing to work with anybody to change it.”

Nevertheless, that membership remains overwhelmingly white and male, although ASLEF is keen to change this.

“We can only draw our membership from who they employ. If there’s an issue over diversity in the industry, we’re willing to work with anybody to change it and work on it.”

Whelan cites ASLEF’s work with Transport for London, and London Overground. Northern Rail, too, “has been very proactive in seeking to work with us at this level”. ASLEF also partners with groups such as Women In Rail.

“We actively go out and seek to do these things. We’ve had all sorts of initiatives working hand in hand with employers, such as at Stratford, looking to recruit people from the local community.”

The cultural barriers are still there, however. Whelan recounts one anecdote about a train operating company placing an advert in Cosmopolitan to try to recruit more women train drivers: “A woman opened a magazine, saw the advert and said to her husband ‘you should try this’.”

Clearly, there remains a lot of stereotyping. And Whelan believes that many people still don’t understand the job of a train driver.

“There was a time when there were physical barriers. In the days of steam, and even when you had much more hauled stock when people would have to lift heavy couplings, not every woman was ideally suited to it and the physicality of the role.” But that has fundamentally changed: “Most trains are step on and step off.”