Putting the fun back into fundraising 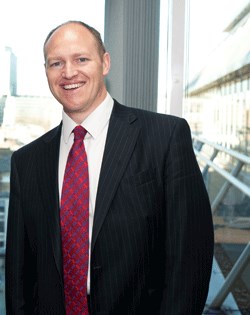 Shoveller is managing director of the Network Rail-South West Trains Alliance. He’s a busy, busy man, but is still finding the time to try and boost the work the RBF does. And his enthusiasm is palpable as he talks about his new role.

Shoveller’s honesty regarding what he did and didn’t know about the charity is refreshing. And he wants you - the RAIL readers - to help. Obviously donations would be nice, but failing that… ideas. Innovative ideas that could help attract donations are what Shoveller wants. (More of that later.)

RAIL meets Shoveller on January 15, two weeks after he took up his post. Meet at Waterloo, I am told, as he’s found a break in his diary from running one of the busiest franchises on the UK network and the only ‘Deep Alliance’ so far in existence. (The hub of this operation is Britain’s busiest railway station, London Waterloo, where more than 95 million people pass through per year.)

When I arrive, Shoveller has been filming for a promotional video that will be released later this year for the RBF. He has already changed the plans - originally he was supposed to stand on the busy concourse as passengers bustled around him, but that idea was changed to him standing on one of the busy platforms while one of his trains glided past.

RBF Chief Executive Abi Smith is extolling the virtues of the charity’s new chairman. She’s cursing the cold, but is embracing how Shoveller is going about his business. Happy with the filming, it’s decided we should move to Shoveller’s office on Blackfriars Road.

It’s usually a ten to 15-minute walk, but today it takes longer because of Smith’s decision to wear very high heels, and there is concern that we will miss our slot with Shoveller.

Not to worry - we beat him to his office as he had decided to pencil in a meeting with a Network Rail manager for his route… and which he conducted walking from Waterloo. “It’s about being time smart,” he says.

Sat in his office, he bursts with pride at the opportunity. “First, let’s start the credits,” he insists. “Dominic Booth brought focus to the RBF over the past four and a half years. He made the RBF visible.”

Shoveller is the chairman, and there are 11 people on the board. “I chair that. My delegated authorities are done, and it’s really about being able to do different things with a vision and encouragement.”

He explains his background, and how the railway supported its staff. “I joined as a guard and was asked to join a goodwill association.”

He says that the railway has changed dramatically since he first joined British Rail, and that these days there isn’t perhaps the pressure he felt to sign up. The world, he admits, has different views to helping each other, and to charity. But he accepts this, and is certainly not judgmental about it. With Shoveller, everything is an opportunity.

“I have arrived at a time that is really positive for the RBF. My task is to develop it, and add to thinking that has already been done. It is a great time. I have already been involved and things are evolving.”

He admits that bringing his enthusiasm, passion and contacts book are some of the reasons for the RBF wanting him on board.

“I can talk to people, so watch out suppliers,” he chuckles. “And the next time I am speaking at a conference there will be a charity collection.

Shoveller also says of the RBF: “I want it to be more relevant. In my day you joined the railway despite the money. You couldn’t recruit and then ask for money, but people did.

“Now, people will say - rightly - ‘hang on, what’s the problem?’ People are well paid, considering. Yes, some are well paid and there’s good security, but for others it is hard times. RBF had an important time then, and now. So, is the RBF relevant now? Yes, and that is the challenge.”

The RBF is perhaps best known for looking after former railway staff who have fallen on hard times. It’s perceived as the charity that looks after people who have lost loved ones, who cannot afford a decent funeral, or even a fridge to keep their food. People who have given their career to serving others are then forced to rely on handouts.

There is a belief, perhaps, that it is only retired railway staff who qualify. Shoveller nods at this perception of the RBF. He needs to change that mentality.

“You wouldn’t simply expect an employee who desperately needs a fridge to come and say so. And, of course, we’d all like extra help with the essentials. Part of the innovation is focusing on information. It’s not all fridges and funerals.

Nor is the RBF tied to a specific union. “They offer help, but the RBF is independent,” he says.

He continues: “There are lots of people - employees, be they for TOCs or Network Rail, usually contractors - that do need help.

“We see zero hour contractors, and there is not the same level of protection. There are roles that are low paid. Cleaners in London can barely live on a minimum wage. They may have several jobs, and what if there is a change in their circumstances?

“Even for someone who is well paid all the cards can suddenly change. All you need is something to happen unexpectedly.”

That is where the change in perception is needed. One key element is who is eligible for help. Presumably those who need help have to have contributed to the RBF pot in the past?
“I thought you had to be in it,” admits Shoveller. “You don’t. You don’t have to have been a contributor to make a claim.”

He adds that anonymity is key. People do
not have to be made aware that the RBF has helped a colleague.

“We don’t want them to show that they have been helped. It is confidential. I think people may well have been helped - I am not sure. The staff at Waterloo, for instance, the gateline and night staff, roles like that. They are not the well-paid jobs, but they need to feel they can have support if needed.

“These are some of the hardest jobs. Working nights and in locations that, frankly, you wouldn’t want to be. You have to believe that it is worthy of supporting these people if they need help. The misconception is that it is only retired guys on hard times. It isn’t.”