Carne’s vision for a Digital Railway 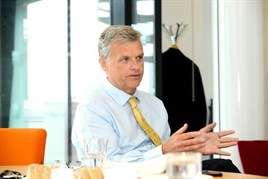 You certainly can’t fault Mark Carne for his vision of a British railway system transformed by digital technology. He believes it would not only create the extra capacity we so desperately need, but also bring a major safety premium.

Carne’s vision is big, bold and quite breathtaking. And in his first year at Network Rail, he has firmly grasped the most uncomfortable nettle with tremendous enthusiasm.

On a railway which in many places still relies on Victorian lever frames in traditional signal boxes to control traffic, with semaphore signals worked by wires and gravity and points switched by long rodding runs of mechanical linkages, there’s certainly plenty of room for modernisation. It’s no exaggeration to say that the oil lamp isn’t long gone on our main lines.

And don’t forget, you still find signalboxes in some surprising places - even in places such as Stockport as a result of the pre-Pendolino West Coast Route Modernisation’s problems!

Even where we do have latter-day multiple aspect colour light signalling, Carne refers to these as “coloured lights on sticks”. And he is by no means the first to do that. I distinctly recall Sea Containers top man Jim Sherwood (well known for his ascerbic tongue) scathingly using the same description at the launch of Great North Eastern Railway in 1996! A mere 18 years ago.

“And if that coloured light stays red,” Sherwood went on, rather sneeringly, “the driver has to climb out of his cab, down onto the track, and use a telephone to talk to the signalman.”

This all speaks of the slow pace of change - as well as the practical difficulties - of upgrading signalling systems. Especially when you have to carry on using an increasingly busy railway at the same time.

So yes, Carne is ‘on the case’ about digital technology. His argument is entirely logical, too. “Look at air traffic control in the UK,” he says. “A few years ago, under the old analogue system, capacity reached a plateau at around 300,000 movements. Once the new system was introducd, it brought vast extra capacity - a 61% increase. We need to do the same thing with the railway.”

So, what precisely does he mean by ‘digital railway?’ Surprisingly, for an infrastructure owner that has been criticised consistently for not appreciating customer needs, that’s where he starts (not with train operations). He believes existing capacity can be boosted by maybe 40%.

“The digital railway is where we use digital technology first and foremost to change the customer experience,” he begins. “So, there’s better information to customers standing on platforms. At the moment we know we can do better about providing information.

“There are also better ways of providing them with means of buying tickets or buying access to trains. Do we even need tickets in the future? We can do that digitally.

“We can also improve communications and connectivity when they are on the trains - and I’m talking now about the railway industry as a whole. For our part, we are already making strides to use digital technology to change the way our workforce interacts with the railway.”

“Using these smart trains, we can provide down-the-wire information to people on the track, live when they are there, completely changing the way we work,” explains Carne.

“Then, of course, you’ve already mentioned digital control of trains - or in-cab signalling. This is a huge transformational opportunity - the biggest change in the railway in many generations.”

Warming to his subject, Carne extols the operational and safety benefits that in-cab signalling would bring - chiefly by eliminating not only physical constraints but also dangerous working environments.

“If we move to ETCS, we also remove the need to maintain all of this equipment on the line, so we have a safer track and more reliable railway. This would then be cheaper - we would be able to run more and faster trains that are closer together.

“They would also be more environmentally acceptable trains because they won’t be stopping and starting at red lights - they will just be slowing down and speeding up again. In terms of the overall passenger experience I think it can be a really major step change, but at the moment the programme to roll that out across the network is a very long one - many decades.

“This means that for those many decades we will be running mixed signalling across the network, which is something I also think we should have a look at. So we must set that out as an option that can then be considered by those who ultimately decide how much money should be invested in the railway. At the end of the day, that is a decision for governments.”

Therein we run headlong into one of the big dilemmas of Carne’s thinking. You can’t fault his logic in setting out either the benefits of digital control, or the disbenefits of taking half a century to install it. But at a time of escalating public spending cuts, is it feasible to think this is ever going to happen?

It is a massive undertaking - because Carne is actually talking about getting this job done by 2028-ish. That’s right, eliminating every trackside signal and moving to in-cab control within about 15 years.

To put that into context, current thinking on ETCS/ERTMS envisages a start made in the mid-2020s with completion by around 2062. Each extension would be provided as existing signalling schemes come up for renewal.

Again, it’s hard to argue with Carne’s logic that taking over 30 years to fit ETCS isn’t sensible, as the technology will have completely changed by the time the job is finished. And yet, as he implies, it’s a big and expensive decision for Government to have to take - and that’s before you even consider whether NR is culturally and managerially capable, with the right skills, to be ready for such an enormous task? And in any case, is it definitely the right answer?

“I’m not saying that it’s the right answer yet,” he replies. “I don’t think we have done the work to say that it’s definitely the right answer - but if we don’t do the work to actually consider it, then we will never know. So let’s do that work, let’s lay it out as an option. I think it’s a very exciting opportunity for the railway as a whole.”

There’s no doubt, Carne has absolutely bought into ETCS, which he clearly believes must come - and must come soon. The capacity problems are just piling up, he says.

“ETCS won’t apply in all cases and so we will still need to invest in new railways, like HS2,” he says.

“But for our complex urban railway systems, particularly London and the South East, Wessex (especially coming into Waterloo), Victoria and around Manchester and Edinburgh, there is a lot of opportunity to get many more trains on our existing network.

“The prize includes bi-directional running at basically no cost, plus a huge increase in flexibility in the railway. Reliability will also benefit, given that 10% of our current primary train delays are a result of signalling failures. We’d see less construction, less pouring of new concrete, more limited building of new railway lines, because we will be using the existing network much more intensively.

“Also, let’s not forget that 80% of our SPADs are caused by drivers either not seeing a signal properly or seeing it in a maze of other signalling, or through inattention. So there’s a significant opportunity to improve safety there, too.

“Plus, we will have managed to significantly reduce the number of people we actually have to put out on track, in order to fit or install or maintain this stuff.”

Carne’s vision means scrapping the existing ETCS aspiration of rolling it out incrementally, as various resignalling schemes become due.

“So do we want those huge cost and environmental benefits and faster running? I look at this and ask ‘what is not to like about this, why are we not doing this faster?’ Yes, we know our existing signalling is fundamentally very safe and pretty reliable, and has been perfectly capable of handling the kind of capacity that we have had on the railway over the last few years - but it’s reaching its limit.

“Our railway in certain areas is full and if we are going to make the step change in capacity that we need, we need to think about different ways of controlling trains. Our existing rollout plan for ETCS is based on replacing existing signalling when it reaches the end of its service life. That way we will end up with very fragmented deployment of ETCS, with little bits and pieces of it all over the network over the next 50 years, but not necessarily connected up.

“Because of that, you have to invest in kit on the trains, because at some point in time the train will run over a bit of ETCS railway - so you’ll get the cost but you won’t get any of the other major benefits.

“So, by 2024, two-thirds of our trains would have been ETCS-enabled, but only about 10% of the track. This is a sub-economic optimisation of the opportunity for digital railway. What would it take to actually do something dramatically different?”

Carne stops and reflects for a moment, perhaps aware that his zeal for the principle outstrips the finance, skill, and even will to bite off such a huge job and then hope it can be chewed.

He continues: “This isn’t a plan, by the way. I want to be very clear about this - this isn’t a plan, I call this is a vision. That is to say, I am asking what would it take for us to deliver a complete, national integrated railway.”