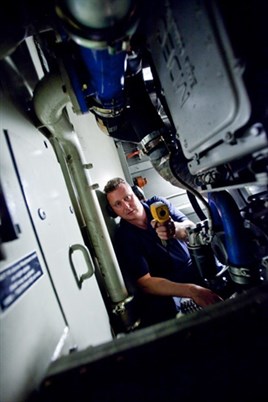 “The difference between my job and a typical engineer is that I need to understand how the industry works, not just technically but operationally and geographically.

A standard engineer will see the train on the testing table, run through the motions and fix it without ever seeing the beast in the wild. I work on live rolling stock… and my actions have a knock-on effect which could cause problems 100 miles down the line.

It can be quite frustrating because, as an engineer, I want to fix everything. But I have to patch up problems and keep passengers moving safely until the train is taken off the tracks for a full maintenance exam.

A day’s work can take me anywhere in the country and I like to wake up every morning at 0400. The early start gives me enough time to check my tool box, the riding list (emailed to me every morning), see how the network is running and be out of the door for a drive to Taunton Station, and then onto the base in Swindon.

Some of the team like to travel light but I am one of those people who can’t throw a tool away, you never know when you will need it again. My kit is by far the heaviest and that doesn’t include the wad of paper specifications, maps and notes I keep with me everyday.

We work on a ten-week shift cycle with three weeks early (0600-1600) and three weeks late (1200-2200). The riding list usually includes 15 jobs per day, and we work out who will do what between the 13-man team. It can be anything from braking failures to VIP trips, which always require an onboard engineer.

We cover four areas of the network by splitting it into South Wales, Reading, Swindon to the West of England and Taunton to Penzance. We are also the first on the scene in emergencies - which means I’m ready at all times to pack up and leave as soon as the manager at our base in Reading calls.

There was a breakdown four years ago outside Paddington at Park Road, and the train was sat across three or four lines in the evening peak.

It had a brake fault and was holding up one of the country’s largest transport hubs, with detrimental effects everywhere else. It was a braking problem, which meant we couldn’t drive it back in or push it with a high-speed train, not safely.

It gets very stressful when you know how many people you are holding up, but you have to keep a clear head. The controller at base usually has the final say but their decision is based on the information and recommendations given by the engineers on scene. The only exception is with fatalities.

We eventually brought in a locomotive to pull the train out of the way. It only took a few minutes but what happens at one end of the rail network inevitably affects somewhere else, and it caused quite a few delays further down the line.

In those situations, staff at the station like to ask questions and get involved, but you have to be quite diplomatic and let them know that they can help the situation, just not by standing over my shoulder. Although, when I’m on board for a routine check it is good to have a talk with staff and drivers. I’ll inform them of engineering changes in the industry and what to look out for, and they do the same from an operational point of view for me.

I don’t have a set lunch break. I take a few minutes here and there but I could be anywhere in the country, so it’s basically whenever I have the chance to stop for a few minutes. I travel hundreds of miles every day, so when I’m not in an engine room I will be looking over the notes and catching up with industry developments.

When you see problems (from a damage point of view) you start to understand the trends, and you can almost anticipate faults that are likely to happen. Cooler groups are a prime example. They are checked every summer, but a few will inevitably show blockages that wouldn’t normally be caught without our tests.

We are an advanced warning system, and that involves a lot of pre-exam auditing before stock is moved to the depot for a full exam. I do get the chance to visit a few depots and see the trains on the test-table and an opportunity to talk to engineers about the problems caused on the network that may not be so noticeable off the tracks.

On an early shift, I’ll be finished at 1600 but I won’t be back home for a while - it all depends on where in the country I am. I prefer doing the late shift because my wife is also a shift worker and we like to walk with the dog through the forest in the morning.

We live in a cottage in Cullompton, Devon and I have been doing it up for years, but it has sat 90% complete for a while. I keep saying that I should be getting back to finishing it.

The job means I am always on call, so it’s best to go to bed early because you never know when you might have to rush back to work. Hopefully, I’ll be asleep at 2100 and be up again at 0400 for another drive to Taunton, and then, who knows?”

Profit margins on FirstGroup’s rail operations increased in 2015-16 to 5.6%, but revenues fell significantly with the loss of two franchises.