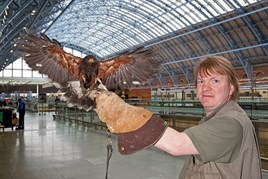 “I’m always up at 0600 to fetch the birds from their night-boxes and let them stretch their wings. They stay in the shed, outside my house in Leatherhead, Surrey, at night for protection, and they normally wake just after I do. I weigh them before flying every day to make sure they are ready.

I keep a total of six birds of prey for this job. I’ll give the Harris Hawks - the bird of prey we use at the larger stations in London - a quick check over and then pack them straight into the travel boxes for a journey on the M25.

It takes two hours to do a full job at St Pancras and I like to avoid road traffic by arriving about 7am. Once there, I’m looking for any signs of pigeons - anything from the birds themselves to their droppings. When I started, there was a pile of remains around the clock, near the Sir John Betjeman statue, and the cleaning staff would have to spend hours each day tidying up. Now I’m proud to say there usually isn’t any.

The Harris Hawk isn’t released right away because we want to warn the pigeons of its presence. I’m certainly not there to hunt the pigeons. The aim is to use the birds’ natural instinct to stay away from predators, making the hawk just like any other pest deterrent.
It flies around to show the area is inhabited by a dangerous bird, and it’s very rare that a pigeon will come back once it’s seen a bird
of prey.

It can be pretty strange to see a hawk inside a station and members of the public do come up to me to ask what is going on. When I tell them, more often than not they will just say: “Oh, I told you he was clearing the pigeons out”.

I have had the occasional person come up to me and complain that what I’m doing is cruel - but it’s very rare. I’m more than happy to explain that it’s near impossible for the Hawk to catch something. Not only are they less agile and half the speed of pigeons, but there is a lot of warning given, including bells around their necks! So the pigeon literally hears the hawk coming. In the wild, hawks will attack in packs of ten to 15 to corner their prey, flush it out and then share the meal. A single hawk doesn’t stand much of a chance of doing anything except scaring the pigeons away.

Inevitably, the hawk will catch something around once a year and that’s the worst part of my job. Even though they are trained not to, you can’t fight instinct.

When it does happen, the hawk will stay away for hours until he’s hungry again, leaving me sitting somewhere on the station waiting for him to come down. They associate the glove I wear with food - when they are released they come back to me because I am offering food.

A pigeon was caught over the Eurostar track last Christmas and, because the bird is too heavy, even for the hawk to hold in mid-air, they both dropped right between the tracks. Two lines in the Barlow shed were closed and everyone gathered around to see what was happening.

I think the hawk got a little nervous because within minutes we saw him fly up into the roof girders, leaving the pigeon behind. Of course, everyone else got bored and things went back to normal - but I was sat there waiting until he felt like coming back.

The birds are reared in an enclosed pen and kept away from people until they are 16 weeks old, when they are old enough to start training. They have relatively the same sense of smell and hearing as people, so we have to build them up to be comfortable somewhere as large as St Pancras. It’s a bit like sheep dogs - you train them to work and respond to blows on the whistle, although they can only respond to a few signals.

After a few flights around inside it’s always best to do the same around the outside. too. It’s like marking a territory and letting the other birds know that it would be dangerous to venture close to the building. You’ll never clear the pigeons out completely, because of the food, but to only have three or four in the whole station makes me feel proud.

When the job is done, I’ll put the birds back into their travel boxes and bring them home to their aviaries. They are not tethered down and, with enough room for all six Harris Hawks to stretch their wings, I know the whole group enjoys themselves. I’ll be back at the home office around lunchtime, if I don’t have another job on, for a cup of coffee and to organise all the paperwork.

It usually takes a few hours, so I’ll finish at 1800 finally getting to concentrate on my family. We keep two falcons, some owls and a few vultures for corporate entertain-ment, and the kids love to spend time with them all. I guess you could say I work seven days a week, but the rest of the family loves helping out and the fresh air more than makes up for the amount of travelling. I’ll be in bed as early as possible - sadly about 2100 - and then back out that door with smile on my face for morning checks at my usual time. “