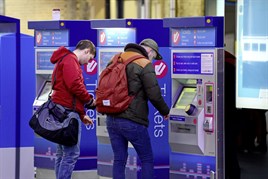 Bewildering would be one way of describing the UK rail fares system. It seems that everyone you speak to is confused by one aspect or another - they may not be clear on how fares are set, or who the money goes to, or what it is actually spent on.

Within the industry, it is a constantly debated topic. Are fares really affordable to passengers? Is there a better way?

The flexibility of rail fares, compared with those on other forms of public transport, is part of what makes it such a confusing topic. You can turn up at any station, and buy a ticket that allows you to travel to your destination via any number of routes (and, subsequently, any number of operators).

Without some impressive telepathy, there is currently no way for train operators to track which of the available routes you will choose. So how does the money you paid find its way to the right operator?

In the days of British Rail, this wasn’t an issue - eventually, the money all ended up in the same pot. BR then developed a system called Operational Research Computer Allocation of Tickets to Services.

What a mouthful! But using some clever calculations, ORCATS (as it’s more commonly known) looks at the current timetable, calculates the likelihood of each option being used, and divvies out the cash accordingly, with the higher proportion going to direct trains and prime routes.

This means that train operating companies (TOCs) you didn’t travel with still receive a proportion of your fare, because you could have travelled on that route if you’d wanted to. This is not the case for Advance fares, where you book a specific train on which to travel.

A second complication to the fares structure is regulation. About 45% of rail fares are classed as regulated (these are usually the ones on commuter routes, where rail is more practical than other modes of transport, plus all long-distance off-peak returns).

TOCs are allowed to increase regulated fares up to an annual cap determined by the Government. This cap is set with reference to general price increases measured by the Retail Prices Index (RPI) from the previous July.

The ‘fares basket’ system means that the average increase of a TOC’s fares is considered, rather than each increase individually. So if the cap was set at 3%, the TOC could raise some by 5% and others by 1%, and it would still qualify. Even so, there are rules in place about how many stations the TOC can do this for, and by how much.

The remaining 55% of fares are unregulated, covering travel options where there is more competition from other methods of transport. Unregulated fares are decided entirely by TOCs. Where a TOC is limited by how much more money it can raise through regulated fares, the unregulated ones can be increased to fill any gaps.

The regulated fares structure was introduced in 1995, when it was decided that fares would be regulated by RPI.

From introduction until 2013, the cap was more often than not set at RPI+1%, usually (but not always) with a flexibility of 5% for the TOCs (allowing a maximum increase to a fare of 5% above RPI+1 provided the average across the TOC stayed within that figure).

With fares usually rising each year at RPI+1 (although they were capped at RPI for 2014), it begs the question: what will happen to fares if that trend continues? When does the rail network stop being affordable for a significant number of people?

This question is one that particularly concerns the Campaign for Better Transport, so it commissioned London-based strategy consultant Credo to prepare a report analysing the potential impacts of different fare regulation structures during Control Period 5 (2014-2019). This Fares and Rail Financing report was published in January, and provides some interesting food for thought about future fares models.

Credo’s report looked at the percentage of take-home pay that goes on Season tickets. The example shown in the report is for a commuter travelling from Reading to London (including a travelcard) on the average 2013 London salary of £34,895, providing a take-home of £26,539.

Of course, it then becomes a political debate about whether or not that is a reasonable figure.

One of the arguments is that in order to earn his living, he needs to be able to get to work. So he has two choices if commuting becomes unaffordable: change jobs or move house. But with fewer available jobs than in 2008, and with higher house prices, neither option is particularly attractive.

“This really is a cost of living issue now,” says Abrams. “We hear many stories from people who have contacted us who simply cannot afford to use the railway anymore.”

The cost of living debate is clearly not just a transport one, but Credo’s research incorporated a theory for how this could be resolved, based not on RPI, but on CPI (the Consumer Price Index to which welfare payments and pensions are linked).

Matt Lovering, a partner at Credo, tells RAIL: “There is a concern that the industry is still locked to RPI. Everything from the regulator’s settlement with Network Rail through to what I pay for my own Season ticket is all linked to RPI inflation, at a time when a lot of the world is moving away from RPI.”

Lovering explains that if everyone agrees that CPI is a more accurate reflection of the public’s income, and that rail fares are a necessary expenditure, then CPI is more appropriate than RPI.

Historically, RPI has been about half a per cent higher than CPI, so RPI+1 is really CPI+11⁄2 - this means that in the way passengers think about price increases, fare rises are more expensive.

“RPI overestimates real inflation so consistently that the Office of National Statistics has dropped it as an official measure,” argues Abrams. “Government has already switched to CPI for most things. Doing the same for train fares would have little impact on railway revenues, but it would save passengers money and bring fares into line with things such as public sector pensions.”

What does Abrams mean by “little impact on railway revenues”? If the Government moved from RPI+1 as standard to CPI, £496 million of potential revenue is at risk - that seems like a pretty big chunk of money to risk.

Lovering puts that into context: “With a total farebox revenue during CP5 of £53 billion, £496m is not a particularly large number in percentage terms.”

He explains that he wasn’t trying to say £496m is not a lot of money (because it is), but that we need to think about “what other things we could be doing and how we could plug that gap”.

Lovering and Credo Special Advisor Jim Barclay talk about using smartcards, and the benefits that investment in projects such as Crossrail, Thameslink and electrification could bring to journey growth.

Says Barclay: “How do you use things like technology to create new products that might allow people to access markets? Secondly, what do you do about using ticketing and fares to manage demand?

“From our point of view, it’s the people doing the technical stuff. We want this to stimulate some thought among franchisees, when they bid for franchises, that actually there’s a creative approach. It’s not just a cash cow, let’s try and see how we can use pricing, and the market and technology, to make a better proposition to the customer.”

Of course, the Department for Transport needs to be on board with that thinking, to allow franchisees the freedom to address some of these issues.

CBT presented the Credo report to the DfT in December 2013. Abrams says: “We didn’t expect the DfT to be as interested or receptive as they were. They have promised to meet again in the next few weeks to discuss this issue further.”

Apparently, the DfT said that any changes to the fares formula would require money from the Treasury, but RAIL understands that CBT has since shared the report with them, too.

But, putting fare increases and future affordability aside, are fares fair?

Flexible ticketing is something to consider here. For example, there have been calls from commuters for two-day and three-day-a-week Season tickets, for those who only need to commute part of the week.

The Cost of Commuting table (see below) compares six commuter journeys and the cost of 2014 rail tickets. So if you’re a Winchester-London commuter, and you only need to travel into the office twice a week, it will cost you £129.80 to buy two Peak Returns. But buy a Weekly Season, and it will only cost you £117.40.

The industry already offers the equivalent of a part-week Season ticket in many cases. So perhaps the principal area of debate is why some journeys are cheaper after only a day, while others require you to travel three days in a week before they become cheaper.

Buying an Annual Season makes that saving even more apparent. On that same Winchester-London trip, based on 230 return journeys a year commuting to work, you would have paid off your Season ticket after only 73 journeys (16% of them). At £10.21 a journey, it suddenly becomes a far more affordable prospect than the normal peak returns.

CBT and Credo have used Season tickets in their statistics, but this doesn’t change the fact that fares have risen considerably… and continue to rise.

If the Government responded to Credo’s report and decided that fares are pricing people off the railway, the alternative for most commuters is driving. But is that actually a cheaper method of transport?

If we compare the £10.21 cost of a Season ticket journey from Winchester-London with a single journey of the same distance (66 miles) by car, the car would cost you more than three times as much (£32.09, when you take into account the real cost of driving - road tax, insurance, fuel and repairs).

The car can often seem like a cheaper alternative, because commuters are not parting with cash either each time they travel (as with walk-on fares) or in one lump sum (as with Season tickets). Which makes the call for more flexible payments for Season tickets (monthly direct debits, for example) one way of putting the cost of rail tickets into context.

The cost of driving is more difficult to compare historically, because while petrol prices have risen more sharply over the years than rail fares, the overall cost of driving has not.

But even with that ambiguity, there is still a huge gulf between the cost of commuting on the railway and commuting by car.

The railway wins the argument hands down. Which just leaves the DfT and the Treasury to decide whether the railway should be doing more to maintain its lead in the coming years.