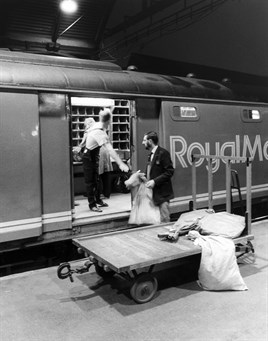 Once upon a time, your bills and letters would have been packed into mail sacks, piled up on station platforms in the dead of night, and loaded onto trains for sorting en route to their destination.

But laden mail trolleys have not clattered their way along station platforms for ten years now. The Travelling Post Office (TPO) last ran on January 9 2004, and is now a distant memory.
And yet, even without the TPO, mail traffic is still being carried up and down Britain’s rail network today.

The first ever post moved by rail was on November 11 1830, between Manchester and Liverpool. It soon became apparent that it was a far quicker way of getting letters from A to B than horse-drawn coaches, and by 1838 the Conveyance of the Mails by Railways had become law.

This empowered the Postmaster General to require rail companies to transport mail,either on their standard trains or on special mail-only trains. The law also required companies to provide carriages fitted for sorting it if needed, paving the way for the first TPO carriage in 1838.

The man behind the concept was George Kastadt, a Post Office surveyor. On January 6 1838 he submitted a proposal to trial a ‘travelling office’, and the first run was made just weeks later. His idea was that time could be saved sorting mail while it was being transported, rather than sorting it beforehand.

The early TPOs were very basic, in terms of facilities for staff onboard. Space for sorting mail was at a premium, and staff welfare was more of an afterthought, to the extent that toilets were not even provided. This was until a postal worker was killed while relieving himself at the rear of a sorting carriage, and it was recommended that the situation be rectified!

Until 1885, TPO carriages had been added to normal services. In that year the first dedicated Mail Special ran, and by 1914 there were 126 TPO carriages in operation - they had become an essential part of mail transportation.

Their use continued under British Rail, but by the 1980s transporting mail by rail had gained a reputation for being unreliable, with mail frequently arriving late. In response, BR conceived Rail Express Systems (RES) to better meet the needs of Royal Mail (RM).

RES came up with a bold £150 million strategy, known as Railnet, focusing on long-distance transportation and putting a London ‘hub’ at the heart of the system.

By the end of 1993, RM had signed a 13-year deal with RES (a three-year interim contract, with a ten-year agreement once the ‘hub’ was complete) to run the trains from its new ‘hub’. It was known as the London Distribution Centre (LDC, now better-known as the Princess Royal Distribution Centre), and was built at Stonebridge Park, near Wembley.

Upon signing that contract, RM also commissioned ABB (now Bombardier) to build 16 four-car Class 325 electric multiple units exclusively to transport mail. This made a total investment in the railway by RM of more than half a million pounds.

In February 1996, RES was bought by EWS (now DB Schenker). Seven months later, on September 30 1996, the LDC opened, signalling a dramatic change for the movement of mail on the railway.

From then on, only dedicated mail trains would run, and all London trains would be based at the LDC. It meant TPOs no longer needed to be based at main line stations - they could be housed at the huge purpose-built depot instead.

Plans for the former Mail Rail underground railway will see it back in use. STEFANIE BROWNE visits the line.