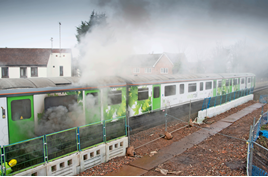 2017 could hardly have started on a sourer note for Vivarail Chairman Adrian Shooter, following the aborted test run of his company’s prototype Class 230 D-Train on December 30 2016.

A fire that broke out within one of the four ‘genset’ diesel-powered engine modules, located beneath the three-car test unit, not only spelled the premature end of the train’s journey between Coventry and Nuneaton that day, but also its entry into service. The plug was subsequently pulled on an eight-month trial with London Midland that had been scheduled to begin in February.

With the goal of achieving safety certification now forlorn, the stricken D-Train was left to limp back from the incident site at Kenilworth to an engineer’s siding in Coventry, before its removal by road to Long Marston, where Shooter promptly launched an internal investigation to determine the cause.

As RAIL reported in February, an oil leak was eventually identified as the culprit, after a forensic inspection of the charred remains of the destroyed ‘genset’. Vivarail was able to point the finger of blame at mistakes made by an external supplier.

But not one to rest on his laurels, Shooter quickly set about repairing 230001 while also implementing a full series of design improvements recommended by the investigation report, aimed at mitigating the risks of any repeat catastrophe (see panel, page 49).

He now says the modified D-Train will be ready to resume main line testing on the Cotswold Line in May. Providing safety certification is then granted, the public will be given a first opportunity to ride it on June 21-22, when the prototype is scheduled to shuttle visitors from Honeybourne to the Rail Live exhibition being held at Long Marston (see feature, pages 42-45).

RAIL was invited back to check on progress at Vivarail on March 30, when an upbeat Shooter pointed to the several positive factors to emerge from the incident - not least the safe evacuation of all personnel aboard the D-Train, and the lack of damage inflicted to the internal saloon space directly above the burning unit.

Dismissing any suggestion of Vivarail suffering the ‘January blues’, he tells RAIL: “My view has always been that there is no cloud without a silver lining, and with this we demonstrated that the fire protection within the car body was very good. We’ve learned from it, and we now know that we have a really good vehicle that can stand up to it. The train has now been repaired and re-liveried, and we’ve been right through the engine module to rectify all the issues.

“Our customers have all said ‘we appreciate it was a demo vehicle and we applaud your transparency’, following the report we did. We also shouldn’t forget that this has happened to other people, but we just happened to be in the public gaze. I seem to remember a Class 172 catching fire at Warwick Parkway in September 2015, but that wasn’t nearly as widely reported.”

Seemingly undeterred by the blaze at Kenilworth, Shooter is firmly pushing ahead with Vivarail’s mission to convert its 220 withdrawn ex-London Underground D78 vehicles to heavy-rail use, by activating its next phase.

That is because the D-Train is designed to be a modular train, and eventually available in a wide range of power sources.

230001 is a diesel electric multiple unit (DEMU) that uses two detachable diesel engines beneath each driving car to power its electric traction motors. But these diesel engines are detachable, to enable easy maintenance but also to enable their replacement with batteries or a combination of both. Alternatively, the D-Train is designed so it can run as an EMU either on third rail or an overhead supply, with a minimal change of the base design.

This would give operators the option to run D-Trains on either electrified or non-electrified lines, by using diesel engines, electrically powered traction motors, on-board batteries or a hybrid configuration.

Vivarail Design Director Neil Bates explains: “This gives us lots of flexibility for whatever scenarios an operator is looking at. I guess if we had a strap line it would be ‘show me’, so we have built a single-car battery-powered unit to confirm our calculations for running on different types of batteries.