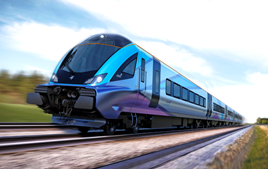 Currently there is a painted Mk 5 bodyshell at CAF’s facility in Beasain (northern Spain). An image released earlier this year of the first bodyshell showed an end vehicle that will house staff facilities, a kitchen and First Class facilities (RAIL 824). The Class 397 design will be much the same, says Davis.

“Trains now are full - they are far too small. They will be full at peak time,” says Davis, revealing that the reason for the quick orders is that it enables TPE to increase capacity almost straightaway.

The CAF deal for TPE’s ‘397s’ was announced around two months after the Basque company won an order for 98 trains for Northern. Davis says the company does small fleet orders very well, which proved beneficial to TPE’s desire to increase capacity quickly. “It is about what was available,” he says.

The franchise is aiming to move away from an inter-urban operation towards inter-city, while at the same time staying true to the fact that it moves large numbers of commuters every day.

Says Davis: “Passengers at Newcastle will see an inter-city train going to London that takes three hours, and they see the quality it offers. Our trains to Liverpool take the same time, and we need to ask if we offer the same service. The answer right now is a no, but that will change in the future.”

“The acceleration on the fleets is better, but we have aspirations to go faster,” says Davis.

“That would also interest the ROSCOs , as they need the best capability for their trains. If you look at the ‘68’, it can do things others cannot.”

He highlights how Beacon Rail (which owns the Mk 5s) would like to run the new coaches at 125mph, but testing in the UK wouldn’t be possible as only a ‘91’ can run at that speed.

So how would the testing be done? As the stock is off to Velim for testing anyway, could something be arranged for the Czech test track?

For the Mk 5s, Davis explains that while primarily the operator is the lead design, Beacon has the manufacturer’s relationship with CAF.

One fleet that is remaining (of sorts) is the ‘185s’. Delivered in 2005-07, the 51 three-car diesel multiple units will be redeployed, with 29 to be made available. They will run in a mixture of six-car formations to Hull.

Twenty-two DMUs are planned to be returned to their owner Eversholt Rail Group. As yet there is no new home for them, but with DfT consultations into extending the TransPennine Express franchise and the future of the East Midlands deal still in the air, there is even the possibility that they could be retained. No decisions have been made, or (according to RAIL sources) are even close to being made.

Davis’ excitement for the scheme is palpable - and he isn’t the only one: “The great thing for TPE is how much people are really excited.”