FROM THE FILES: Shrewsbury's record-breakers 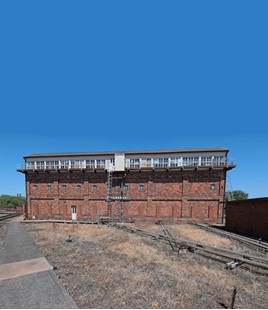 In 1987, the medieval market town of Shrewsbury gained a new claim to fame. Following the closure of Newton Abbot East signal box (SB) in Devon, it became home to the largest operational mechanical SB in the UK.

And after the closure of Spencer Street No 1 SB in Melbourne (Australia) in 2011, Severn Bridge Junction (SBJ) has since become the largest such box left in the world.

Built in LNWR style, the impressive Grade 2-listed three-storey redbrick building is a marvel of Edwardian engineering. It has stood imposingly at the south end of Shrewsbury station (where lines to Hereford and Wolverhampton diverge) since 1902-03.

It has a 180-lever frame, making it the largest of four mechanical SBs that still operate in the Shrewsbury area - although it still falls far short of Britain’s largest ever frame, which had space for 295 levers when it was installed at York Locomotive Yard SB in 1909.

RAIL last visited Severn Bridge Junction SB in December 1997 (RAIL 319), when David Allen examined in detail how it works Absolute Block to Shrewsbury’s three other SBs at Crewe Junction, Abbey Foregate and Sutton Bridge. Together they control the approaches to this important railway crossroads from Chester, Crewe, Wolverhampton, Hereford and Machynlleth, and the station itself via an unusual mix of semaphore and colour light signals.

That arrangement remains firmly in place 21 years later, although it will almost certainly succumb to being fully resignalled within the next 15-20 years as part of the policy adopted by Network Rail in 2011 to centralise signalling and migrate control of the entire network to 12 Rail Operating Centres (ROCs).

In the meantime, its remarkable survival story continues, as local Mobile Operations Manager Tim Furbor tells RAIL: “Here in Shrewsbury we have some of the oldest and newest signalling in the UK operating side-by-side. The box is from 1902-03, while a large part of the Cambrian Line has moved over to ERTMS and in-cab signalling, which starts at Sutton Bridge.

“When I started here in 1990 BR had already started laying cables to open up a new Power Signal Box (PSB) in an office on Platform 3, but somehow we’ve managed to hang on. It might be old, but the mechanical signalling is hugely robust and it has shown itself time and again to be very reliable and easy to maintain.”

Ascending a narrow staircase from the ground floor, visitors to SBJ are greeted on the first floor by vast panels of intricate interlocking equipment that runs almost the entire length of the 100ft-long building.

Furbor explains that although the box was built by London & North Western Railway, the original interlocking equipment was installed by Great Western Railway when it assumed responsibility for signalling in 1904. After nationalisation, this was eventually decommissioned and the current equipment installed by BR’s Western Region, before it too lost control when responsibility for Shrewsbury was transferred to BR’s LMS Region in 1963.

The WR-installed equipment has subsequently been augmented with smaller control units that provide electrical interlocking.

Furbor adds: “What you’re looking at is a mechanical computer. When A works then B works, it’s as simple as that. There’s nothing digital about it.”

On the top floor is the lever frame where signalmen are afforded an uninterrupted and commanding view of the junction below, and of Shrewsbury station’s six platforms.

Only 92 of the 180 levers are still in operation, however, following rationalisation in the 1960s when through trains from Paddington to Birkenhead ended and all inter-city traffic between the North West and South West was routed by BR via Birmingham.

Nevertheless, approximately 300 train movements still pass the box each day (including freight and shunting moves), while the sheer length of the lever frame means the SB must be continuously double-manned.

One of those signallers is 29-year-old Jamie Green, who has worked at SBJ for just over a year now, having previously spent three years at nearby Leominster and Sutton Bridge SBs.

He is one of a company of seven signallers based at the box who each work a mixture of eight- and 12-hour shifts, including days and nights, on seven-week rosters. As a former signaller, Furbor is also able to operate the box and provide relief as and when required.

“This place is fairly unique these days in being double-manned, but with 92 levers to operate it keeps us fairly busy and you soon work through the shoe leather.

“I eat dreadfully, but I don’t think I’ll ever be overweight because you’re never in your chair for more than 20 minutes. If you are then something somewhere has gone badly wrong.”

SBJ is known as a Grade 5 signal box, owing to its size and complexity. Green explains that it is rare for a new signaller to be handed an SB of this grade as his or her first assignment - a steadier progression is the more usual route.

For him, that meant starting life in April 2014 and Grade 2 at Leominster, before stepping up to the Grade 4 box at Sutton Bridge. He says this was the perfect preparation for working a box on the magnificent scale of Severn Bridge Junction.

“It took me about a month to pass out on this box,” he adds. “It’s easy to be daunted by all the levers and bell codes and Absolute Block, but it’s all the usual rules of anywhere else. You can’t just come up here from the street, though, and I thought I’d never be able to work this SB, but you just get on with it until it becomes second nature.”

Green also puts his skills to use in his own time as a volunteer signaller at both the Severn Valley and Bala Lake heritage railways, plus as a conductor at the National Tramway Museum in Crich.

When the time comes to resignal Shrewsbury, he doesn’t think that the more office-like environment of working in a ROC will suit him, leading to a possible change in career. However, he doesn’t think that any such decisions will need to be made imminently, given the likely cost and disruption that would be associated with switching to more modern analogue signaling (or even to an extension of digital in-cab signalling) in Shrewsbury.

He points to the 79-day part-blockade of Derby (which commences on July 22 to recontrol signalling from Derby PSB to a new workstation at East Midlands Control Centre) as a prime example of the scale of work that would be required in Shrewsbury.

At a cost of £200 million, he suggests that NR would need to develop a more robust business case before it decides to sweep away the semaphores in Shrewsbury, and close four SBs that are functioning perfectly well.

He adds: “We’re in a lucky situation at the moment because analogue equipment installed in the 1960s and 1970s is in dire need of replacement, like we will see at Derby this summer. Meanwhile, places like here can go on almost indefinitely given the right amount of maintenance.

“The cost of resignalling is astronomical, and you’d be talking about hundreds of millions of pounds and a pretty lengthy blockade to rip all this stuff up and remodel the tracks. But in theory I have another 35 years left of my career on the railway, and I can’t imagine this SB will last that long, although I hope it does.

“I accept that Digital Railway is progress, and there are lots of advantages of working in ROCs. But we have our eyes on everything here, which also brings a real advantage. This stuff can go on forever with the right maintenance, and if you need a spare part then you just ring a blacksmith.

“I have enormous respect for my colleagues who work in ROCs but it’s not for me, so I’d probably look for a change in direction. I’d probably become a MOM like Tim, because I like to be out there on the coalface.”

Green is on shift with fellow signalman Paul Lewis, who has been working SBJ since January 1998. Despite the age of the equipment he works with, he shares Green’s view that the cost of resignalling is likely to guarantee SBJ’s operational future for at least another decade.

“The equipment here was built to last, so why spend the money replacing it? It will need replacing at some point, but if it ain’t broke then don’t fix it.

“It would be expensive to resignal here, and then you’d need to do it again in 30 years’ time because that’s the lifespan of modern signalling equipment and CPUs . Being mechanical means that we can still work in a power cut and we don’t have to worry about cyber security, so I wouldn’t be surprised if I’m still here in ten years’ time.”

How long the box is kept operational remains to be seen, but as a Grade 2-listed building its physical existence is at least guaranteed as a permanent reminder of this old-fashioned - but extremely resilient - way or working.